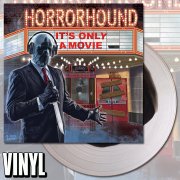 HorrorHound Presents: It's Only a Movie - Vinyl (Soda Pop)

Three years in the making! HorrorHound Presents: It's Only a Movie is a vinyl release boasting 11 tracks – each a cover from one of our favorite horror movie soundtracks – performed by a collection of today’s most popular horror rock and punk bands. These acts include The Creepshow, Argyle Goolsby (formerly Blitzkid), Psycho Charger, Stellar Corpses, Black Cat Attack, Harley Poe, For the Wolf, The Big Bad, The Heathens, Dead Dick Hammer, and Shadow Windhawk ... featuring songs from such films as Return of the Living Dead, The Lost Boys, Pet Semetary, Scream, The Crow, and more. ... Plus, two bonus downloadable tracks from Mister Monster and The Heathens! With cover art by the legendary Ed Repka!