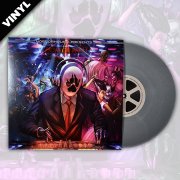 A limited edition EP featuring four tracks from HorrorHound Records artists The Big Bad, Harley Poe, For the Wolf, and The Loveless. This vinyl release includes all-new "cover" recordings of songs made famous for their appearance in such feature films as Dawn of the Dead '04, The Rocky Horror Picture Show, A Nightmare on Elm Street 4: The Dream Master, and Gremlins. Tracks include "People Who Died" (The Big Bad), "Science Fiction, Double Feature" (Harley Poe), "Anything, Anything" (For the Wolf), and "The Gremlins Rag" (The Loveless). Printed in a "reel" limited silver vinyl.