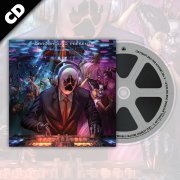 A limited edition EP featuring four tracks from HorrorHound Records artists The Big Bad, Harley Poe, For the Wolf, and The Loveless. This release includes all-new "cover" recordings of songs made famous for their appearance in such feature films as Dawn of the Dead '04, The Rocky Horror Picture Show, A Nightmare on Elm Street 4: The Dream Master, and Gremlins. Tracks include "People Who Died" (The Big Bad), "Science Fiction, Double Feature" (Harley Poe), "Anything, Anything" (For the Wolf), and "The Gremlins Rag" (The Loveless).