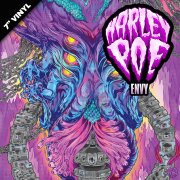 Harley Poe - 7 Inches of Hell - Envy
The fifth edition in the seven part series: 7 Inches of Hell – Envy. This 7" record includes an all new song, "Mummified Mom," as well as the newly-recorded vintage track "Date with the Undead" which was originally released as part of the rare 2006 Harley Poe album "In The Dark."