The Big Bad - Self Titled - Vinyl 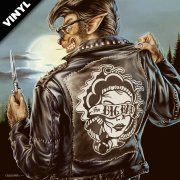 The Big Bad - Self Titled - Vinyl

Hailing from West Virginia – THE BIG BAD are pure horror rock. With definite callbacks to 1950s rockabilly and their undeniable raw punk energy – the Big Bad team with HorrorHound Records for the release of their new self-titled LP. This 10-track album is loaded with horror-inspired rock and roll, with songs such as "Shine the Signal," Monster Squad-homage "Shadowbrook Road," a rockin' anthem known as "Out of the Morgue," and the haunting "Inside the Vial." The Big Bad have developed a following thanks to their consistent touring – and are often compared to acts such as Blitzkid, AFI, and Calabrese. We are thrilled to have the Big Bad as part of HorrorHound Records and to have the opportunity to introduce their amazing horror rock sound to a whole new ghoulish audience! This is the Big Bad – at their best! And we cannot forget to mention the amazing album artwork provided by Justin Osborn! STELLAR! For fans of vinyl, you will want to make sure and pick up this sick moon-colored record – which also includes a free digital download of the album.