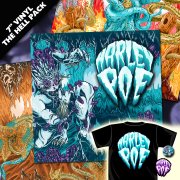 Harley Poe: 7 Inches of Hell "HELL PACK" Subscription Plan rley Poe and HorrorHound Records have teamed up to produce a new groundbreaking series of 7” collector edition vinyl which will see seven BRAND NEW songs released from Harley Poe, paired with all-new recordings of rare songs from the band’s past. Each release features breathtaking covers designed by SCARECROWOVEN detailing seven levels of hell, and will be pressed on an assortment of colored vinyl. If this weren’t enough, each release will be limited to only 500 units! THAT’S IT! After they sell out, these recordings will NEVER be available again. They will NOT be sold on CD or via digital means. This is the only way to own these recordings. Reserve your set today by preordering!

The “HELL PACK” assures the following:
*all seven vinyl as they are released
*Special Harley Poe T-shirt
*Sticker
*Button
*Digital download card for all 14 songs after they are released.(exclusive to the Hell Pack)

Select a Style Sold Out