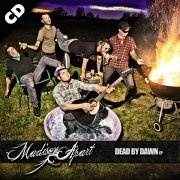 Madison Apart – Dead by Dawn – CD
MADISON APART is an intense and energetic metal act who delivers a refreshing and original spin on the hardcore music scene. Hailing from Virginia, Madison Apart has teamed up with HorrorHound Records to release their previously recorded, yet never released, DEAD BY DAWN EP. This seven-song gem is loaded with horror-influenced thrash tracks, including "Never Sleep Again," "Dead by Dawn," the unrelenting track "The Showstopper," and a stellar metal cover of "Love is a Battlefield!" Their sound has been compared to Memphis May Fire, The Used, and Killswitch Engage – this release is a prime example of HorrorHound Record's goal to present the BEST of the best in music ... Not specifically one subgenre of "horror rock," but all styles. And after seven tracks of non-stop heavy metal, Madison Apart quickly earns your attention!