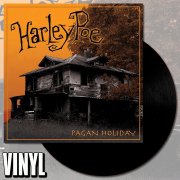 Harley Poe joins up with HorrorHound Records to release their follow-up to the 2012 award-winning Satan, Sex and No Regrets. Harley Poe’s latest album, Pagan Holiday, features six brand new tracks boasting a darker, heavier, more horror-influenced sound – including a cover of John Carpenter’s “Halloween Theme” as well as Harley Poe’s spin on “Paint It Black” by the Rolling Stones.