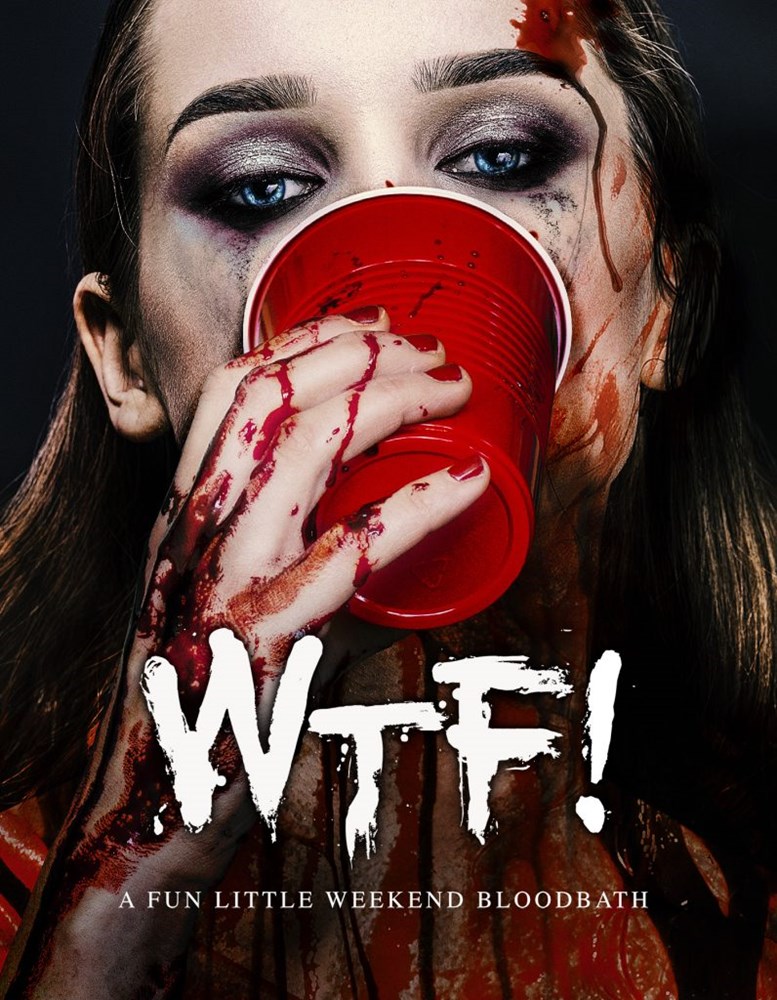 Drawing influence from films like Prom Night (2008), I Know What You Did Last Summer (1997) and April
Fools Day
(1986), we meet a group of cookie cutter seniors who have
decided on spring break to journey out for a weekend of fun to a secluded cabin
withing the woods in WTF! Each member of the group has their own
agenda. Whether it is hooking up, getting high and/or enjoying the last days
before high school is done and reality sets in. Inviting the "girl next
door" named Rachel (Callie Ott), the group discovers that she has a
terrifying past. Three years earlier, Rachel was the lone survivor of a
massacre. Trying to make it as comfortable as possible for this group of
friends, they fool around, tempt sin and think that life could not be better in
the back country. Slowly, the spring break turns deadly. Within in the shadows,
a figure begins to lessen the circle of friends causing misdirection, distrust
and a grizzly body that gets more gruesome, brutal and personal than the next.
As the tension and paranoia reach unstable levels between the friends, Rachel
finds herself thrown back into the hell again. Trying to trust each other,
Rachel wonders why this would happen again? Is it in her mind? What does she
know and won't tell the police? Will anyone survive to post it on social
media?! As the police question Rachel, we wonder "WTF"?

Co-written and directed by first time feature filmmaker
Peter Herro, WTF!  is a formulaic genre film that creates tension,
spills a good amount of blood, presents graphic imagery and kills as well
presenting its share of nudity, angst and humor. With a running time of 80
minutes, WTF!  has its share of issues that hinder the films overall
potential however it does have its shining moments. First, why WTF!  rolls out a cookie cutter set of characters lead actress Callie Ott portrays
the "final girl" role to perfection. Her performance as Rachel has
the most range in the ensemble. Ott has an understanding of Rachel and embraces
what lies beneath the surface through the mystery, horror and emotions. Whether
we see her being questioned as part of the police investigation or dealing with
a failing relationship or surviving at the cabin, Ott stands out.

For a pretty formulaic film, the editing is a highlight.
Editor Steven Parker understands how to layout and pace the film. Throughout WTF!   we see Parker's talent in revealing the details at the right
time. With a woven story line that has a majority of the story showing the
massacre in the woods, the true crime aspect of Rachel sitting for questioning
is not rushed but laced through that breaks up the tension, stages, troupes and
story into one manageable pieces. As we watch in the final credits, each scene
had a detailed storyboard. Another assets to this film comes towards the end of
the second act and fully forms in the final act as the pace excels. Herro and
Cinematographer Justin Kemper effectively manipulate the light and shadow to
build misdirection, anxiety and dread as we see the killer and cast blend into
the pattern of darkness. It is reflected in the framing, angels and blocking
within the house. Part of the visual success primary in the final act falls on
the practical FX makeup headed up by Sabrina Castro. With the acceleration of
the kills, the brutality is amped up with some cringe worthy moments and well
crafted makeup gives it a reality. The idea that these kills are all different
but feel personal adds a dynamic lost in many modern day slashers. One example
in "Wtf!" the brings together the editing, camera work and makeup FX
is the unsuspecting but jarring "nail in the foot" sequence during
the second act.

Unlike some of the well-constructed modern slasher films
like Kill Theory (2009), I Didn't Come Here to Die (2010) and most recently the hybrid Game of Death (2017) playing
the film festival circuit, WTF!  sits on the next couple of tiers
below. Herro, cast and crew are resourceful, cunning, and create atmosphere in
varied ways. Watching WTF! ,  you can see that those who are created
this film are fans and Herro's first effort follows the formula of indie horror
but shows promise ahead for Herro.