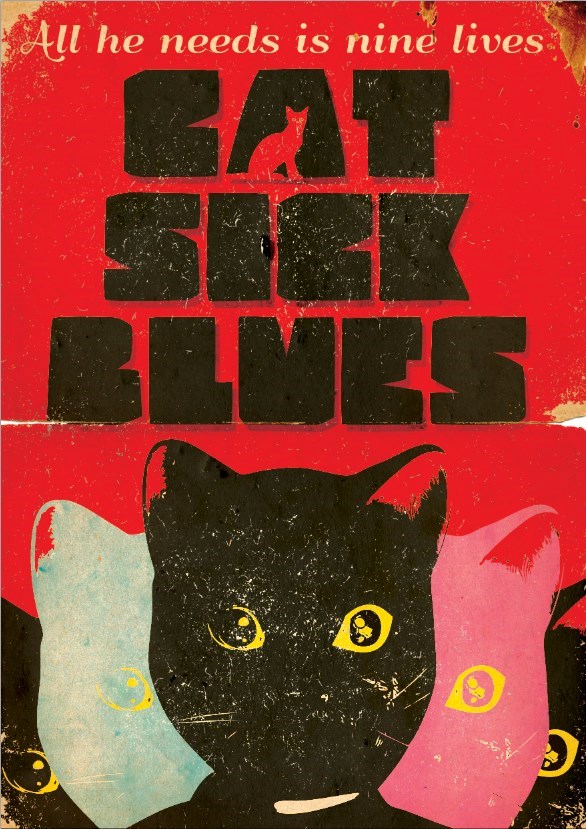 The HorrorHound Film Fest (H2F2) strives to bring the best in independently produced film from around the world.  Once again, a twisted film comes from Down Under.  Australian filmmaker, Matthew Vaughan, give us a story that blurs the lines of bizarre and surreal.  Cat Sick Blues will be screening as part of H2F2.

When you come across a film like Cat Sick Blues, it's easy to pass quick
judgment and see it as a silly idea but all joking aside, this is a seriously
well done effort.  The performances from Matthew Vaughan (Ted) and Shian
Denovan (Claire) are vital to this film's exploration into the human
psyche.  The music in place elevates all the raw emotion of the characters
across the screen.  You can certainly tell it was carefully chosen and
that masterminding this idea was a labor of love.

Through Ted's current state of lunacy, he's led to believe if he takes nine
human lives, he can bring his beloved cat back to life.  He does this
while donning a custom-made cat costume, that includes some rather provocative
details.  To top it off, he even behaves like a cat while in costume,
expressing himself through soft purs and stern grunts.  It's something
you'd have to see to believe but trust me, it becomes quite unsettling.

Cat Sick Blues tells the story of Ted, a grieving cat owner, suffering from
mental issues.  At a support group for grieving pet owners, Ted meets
Claire and becomes captivated by her.  Claire's previous traumatic
encounter, coupled with her compassion, leaves her vulnerable to Ted and their
two worlds quickly intersect.  If only Claire knew the type of person she
is dealing with...

Sometimes, in order to craft a truly twisted horror film, all you need is
that more commonly forgotten element known as heart.  This element allows
the audience to see beyond the brutal violence and disturbing subject matter
and into a much deeper topic.  As a society, we rarely take the time to
understand the mental illnesses that plague the minds of our fellow man.
We're quick to write those type of people off as animals but Cat Sick Blues
fearlessly reveals the human qualities of these so-called monsters that walk
among us.

Cat lovers, this might be what you need in your life or it might be
so disturbing that it has you clinging onto your favorite feline friend a
little tighter as the days go by.  One thing is for sure, this film will
linger and more than likely have you singing the Cat Sick Blues.