When you’ve toured the world, sold thousands of records and have been featured in every major music magazine, what next dream or goal do you shoot for? If you’re Garret Rapp, vocalist for the popular metalcore band, The Color Morale, you shoot for something you’ve always wanted even more than any of the things mentioned above ... you shoot for HorrorHound. A lifelong fan of all things horror-related, Rapp not only wears his heart on his sleeve on the band’s most recent (and awesome) album, Desolate Divine, but he also carries the horror-fan flag high, always adding to his massive and VERY impressive obsession: collecting A Nightmare on Elm Street memorabilia. Rapp collects all things Krueger-related with fervor and we thought for this latest Notes and Blood entry, we’d take a look at Garret’s collection, as well as talk about the genre and what turns him on, horror-wise. 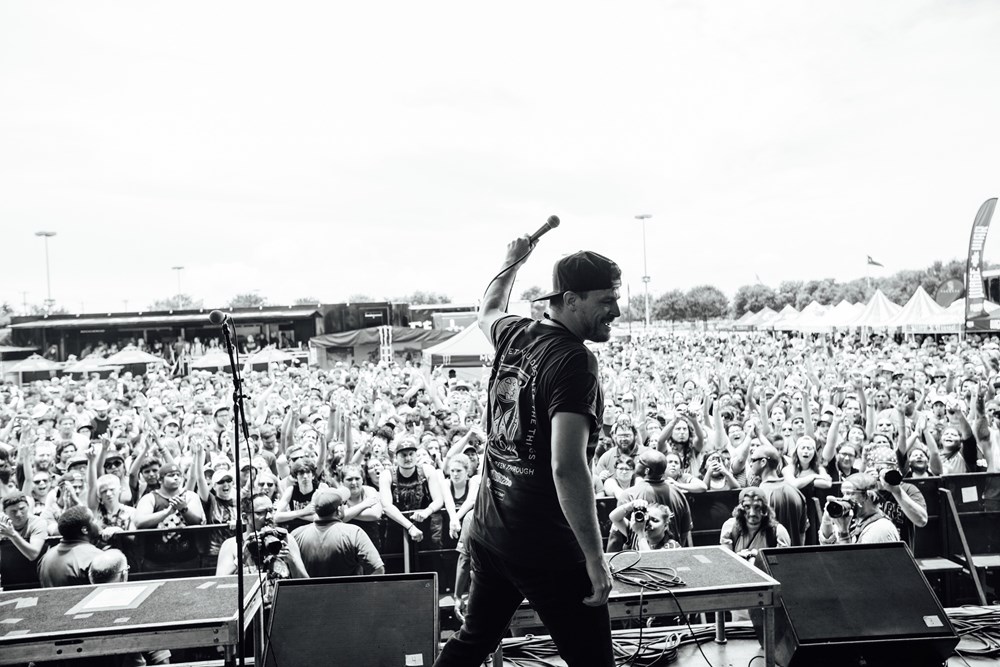 HorrorHound: We all have a horror franchise that is closest to us, one that we latched onto early on. Can you tell us about your love for A Nightmare on Elm Street and what led you to not only being a huge fan but also starting what is now a VERY impressive collection?

Garret Rapp: It all started back in 1988. Every weekend I would go with my aunt down to the video store and rent a few movies. I entered in-store sweepstakes promoting ANOES 4 and actually won the sweepstakes grand prize. The prize pack consisted of a bunch of goodies, and since that day I have been obsessed with the franchise and that film especially. I lost the ANOES4 Vision Street Wear exclusive shirt that came in the prize pack. I have been unsuccessful in tracking down that bad boy.

HH: There’s something magical about the series, and though the original film is a classic, the ANOES film that made me become a huge fan was The Dream Master, which I know is a film you’re a huge fan of as well. What is it, in your opinion, that makes The Dream Master such a unique horror film?

GR: I think I connected to the characters as an adolescent. I idolized Rick, and to this day, I still have a secret crush on Lisa Wilcox. I’ve met her a couple times and still get nervous talking to her!  I mean, the movie had boobs in it, how could a youngster not be a fan!?  This film had a special way of connecting and fusing horror with that current day pop culture like the MTV generation at that time.

HH: You’ve got a collection that is insane, what are some of your favorite items that you own?

GR: I remember seeing a picture in the' 90s of a collection that stretched throughout a basement and I just made it my goal to beat it! I think my favorite piece is a bust made by Fear of the Dark studios (@fearofthedark on IG). I also won a door prize drawing at a 35mm screening of ANOES4 at Alamo Drafthouse in New York a couple years back that I love because the product manager at NECA presented it to me. I also have a Zero Skateboards deck with Freddy on it that I searched for around 15 years. The owner of Zero, Jamie Thomas, actually let me purchase it out of his personal collection.

HH: Any fan of the ANOES series has pretty passionate opinions on the remake, most of those opinions are planted pretty firmly in the hatred side. As a huge fan of the series, what did you think about that one, and if you had the chance to pitch a new, interesting take on the series, where would you take it?

GR: Robert Englund is the only Freddy period … but I just couldn’t stand the character at all.  They should have gone a different direction with it and made it more comedic, or maybe even pay homage to the original franchise more. I think that’s what I love about movies like Rocky Balboa. That movie had bits and pieces of every film within it and that was so cool to see as a fan. Jackie Earle Haley was a swing and a miss in my opinion. I’ve envisioned dozens of actors playing that role. Imagine Daniel Day Lewis playing Freddy!

HH: The Color Morale, to me, has always been a band that isn’t afraid to shed some light on topics that some bands shy away from, and also offer hope to those facing those demons and topics. What led you to start the band and inspires you as a songwriter?

GR: When I was young I had a hard time being around people. I fell in love with horror because I got completely lost in it. I embraced the symbols of evil to a point where I could have control over them, with furthermore gave me control. It was OK to be a weirdo as a fan of the genre. In a horror film, if you’re frightened you simply look away.  I didn’t have many friends when I was a kid growing up and I think I've battled depression long before I even understood what it was. That’s why I support the community, I attend every convention I can when I’m not on the road, I support local artists and companies, and I buy every issue of this magazine that will ever be printed.  To people like me, these aren’t just hobbies, it’s a lifestyle and unique vessel for us to feel like we belong somewhere.

HH: Has your love for all things horror-related influenced your songwriting in any way?

GR: Absolutely.  Check out a song we have called “Living Breathing Something!” 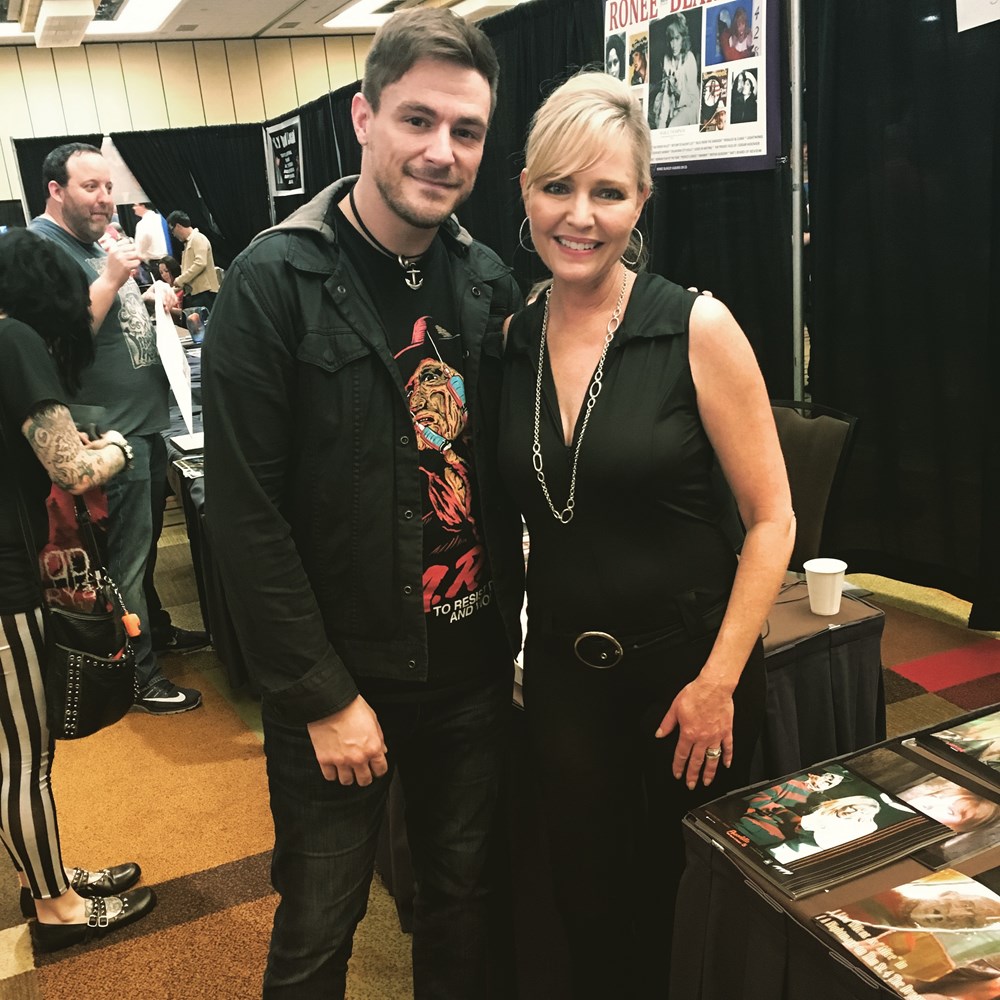 HH: Which horror films really knocked you out in the last couple of years? Why?

GR: A few huge standouts to me in recent were It Follows, Antichrist, and Get Out. There were scenes in each of these movies that completely rattled me. I also think these movies were also incredibly original in the genre. I love those kinds of movies where you still feel unsettled the next day after viewing, kind of like a Fargo or Requiem For a Dream.  There’s a very bizarre comfort in that feeling that only a horror fan would understand.

HH: You’re at a dinner, just you and two horror icons. Who do you choose and why would those two be the ones at your table?

GR: I would say Robert Englund and the late Wes Craven. To listen to Roberts endless and infamous story telling and just get inside the mind of Wes (who I unfortunately never had the chance to meet) would be so incredible.

HH: A vocalist for a popular band, a lifelong horror fan/collector and more recently, a very devoted photographer. You’ve kind of made a name for yourself all across the board. What drives you in each of these fields?

GR: I’m a right brainer. I have to be creating things, or it leaves my mind open to tread dark territory. Actually, film/photog is my next goal after life on the road. I post a lot of things on my IG page from all travels of creativity (@garretrapp on IG). I don’t think artists really have a choice when it comes to right brain living. Since I can remember I’ve had an imagination.  Maybe that was a way for to me to escape harsh and dramatic realities I dealt with at very young ages. The day I stop creating, or consuming myself with some form of creative outlet … is the day the child inside of me dies. If he goes, the artist goes with him. I think that gives validity to a bold phrase like “horror saved my life.”

It's our absolute pleasure to also showcase Garret's AWESOME collection of all things A Nightmare on Elm Street!!: 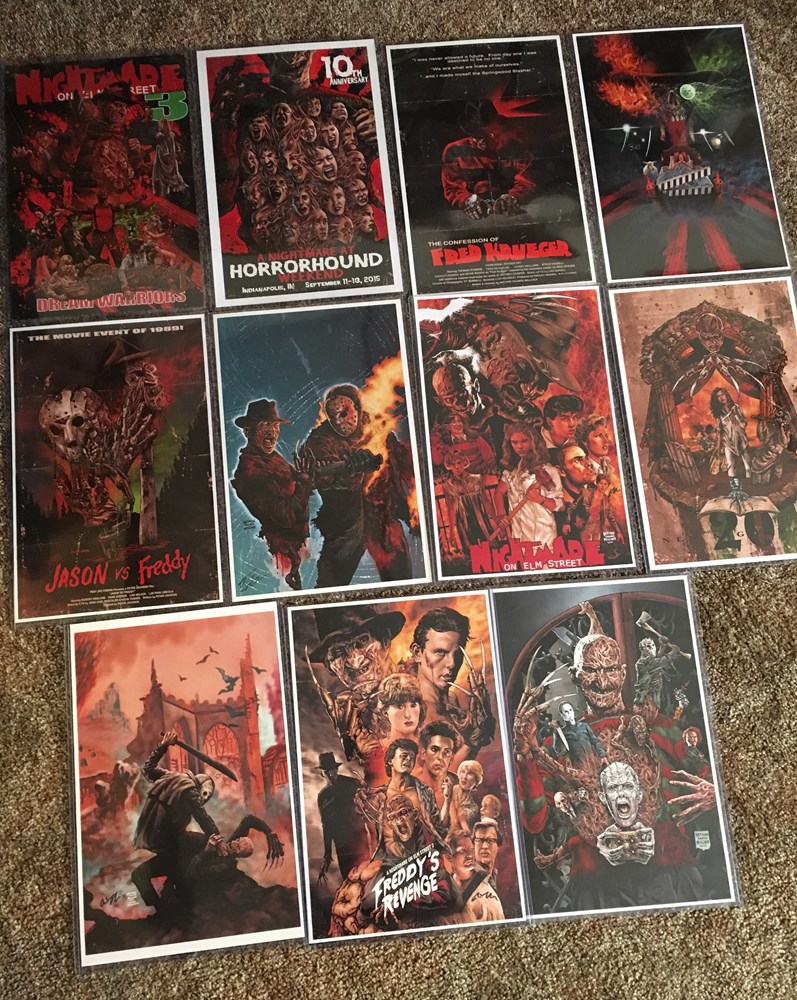 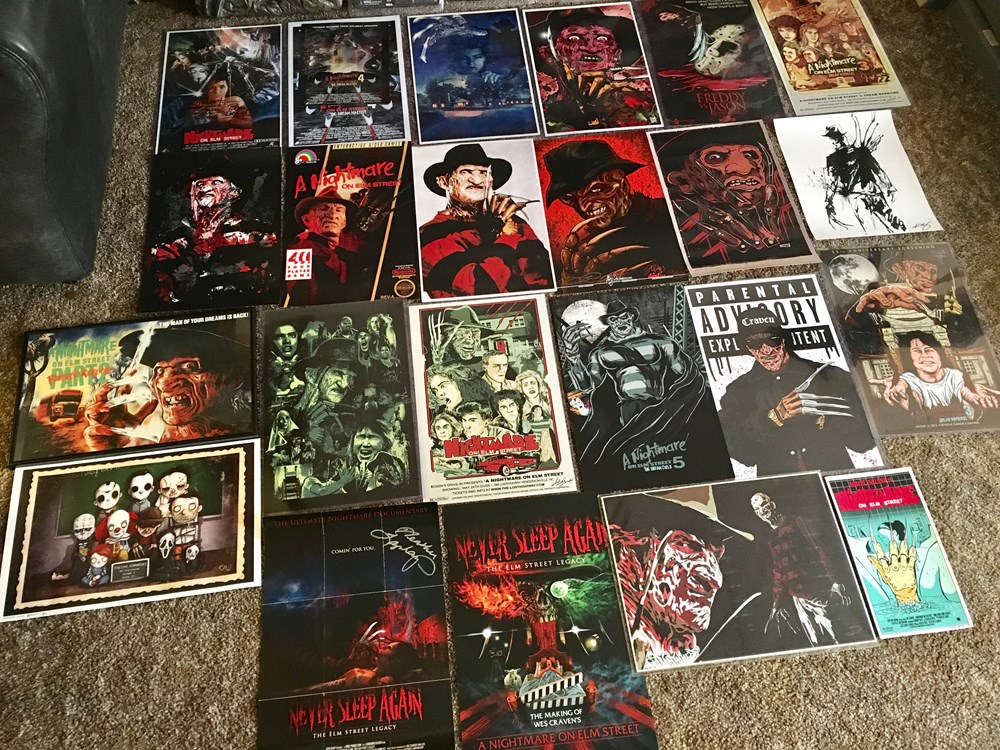 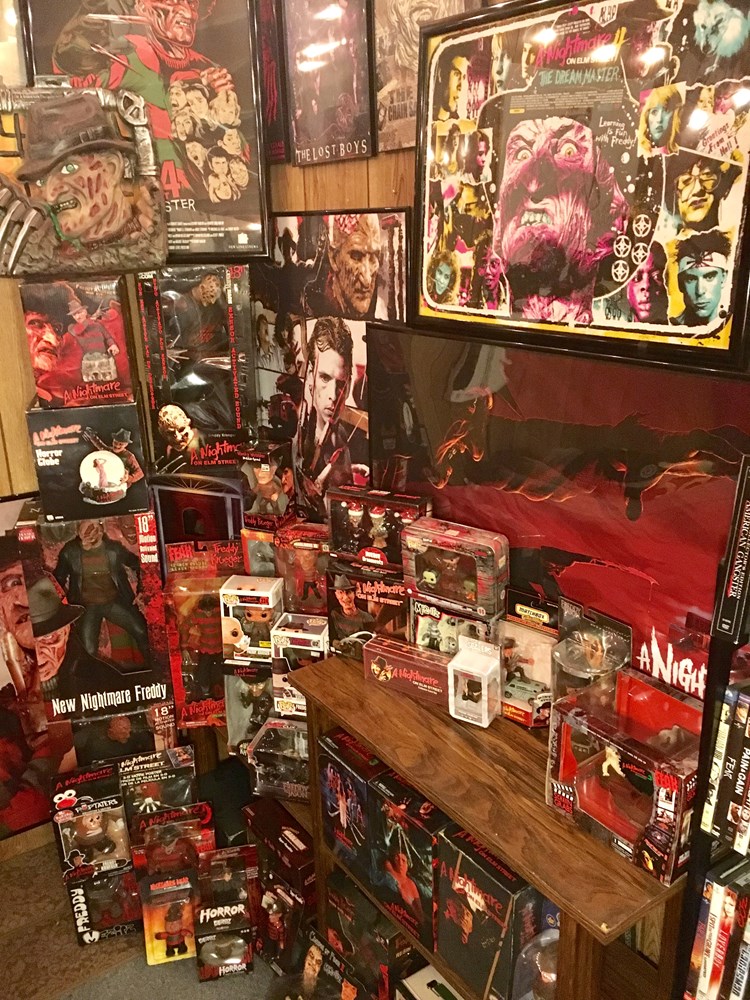 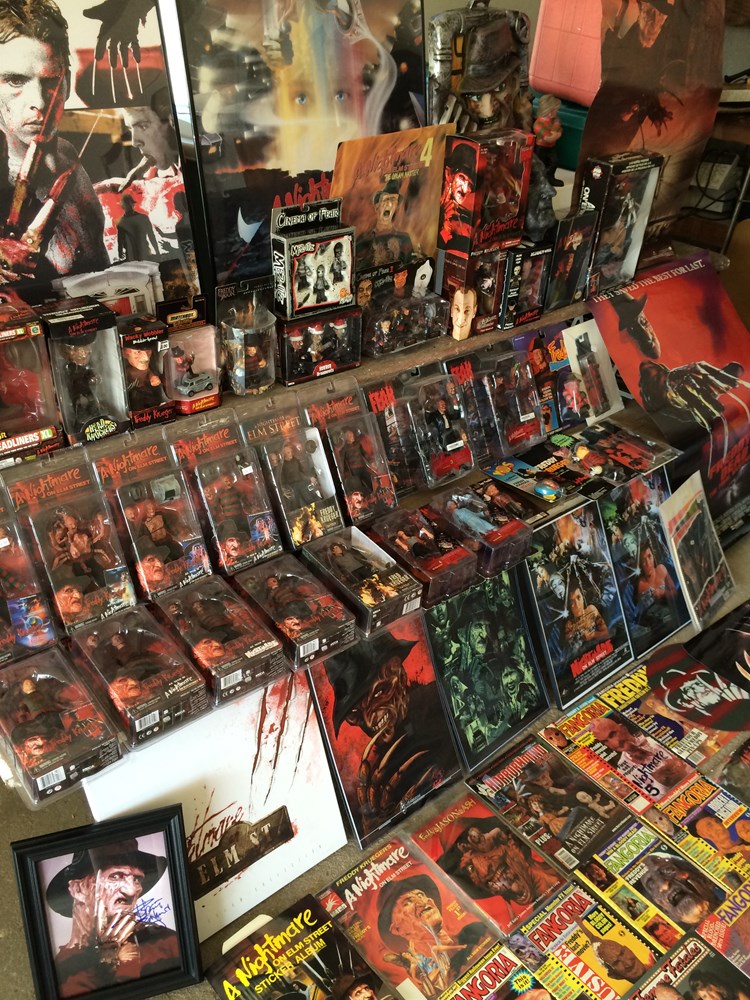 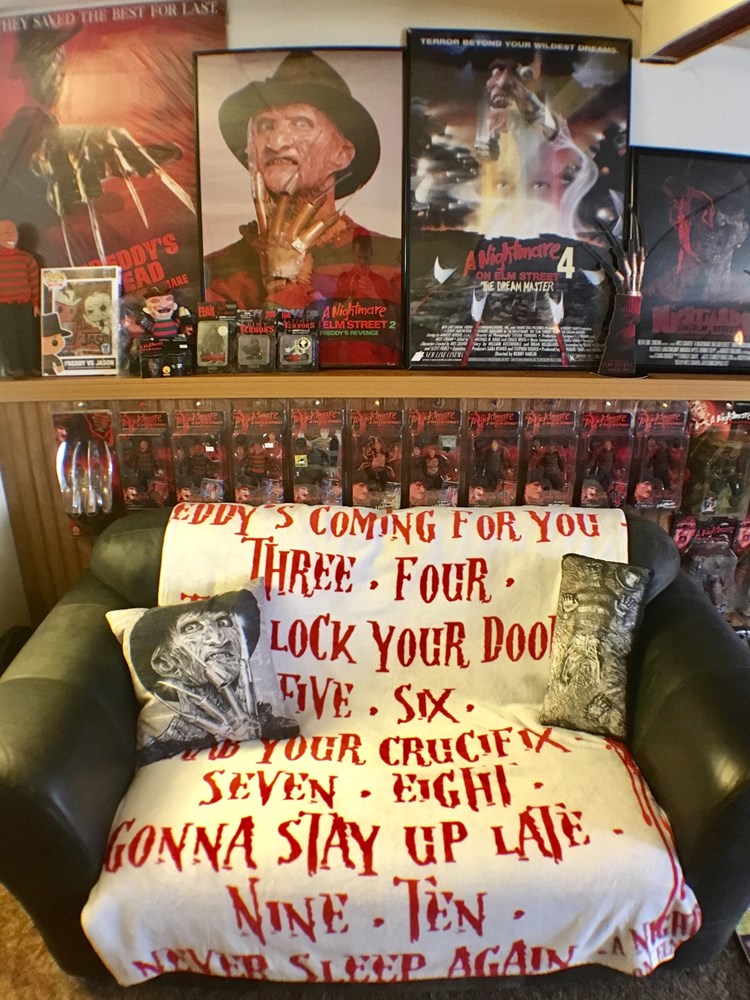 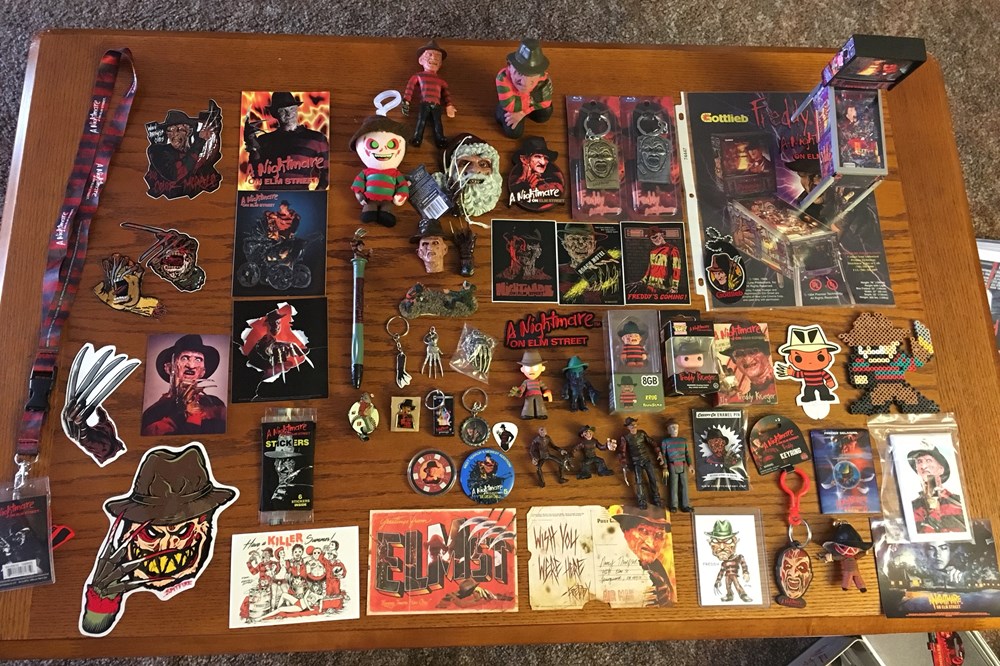 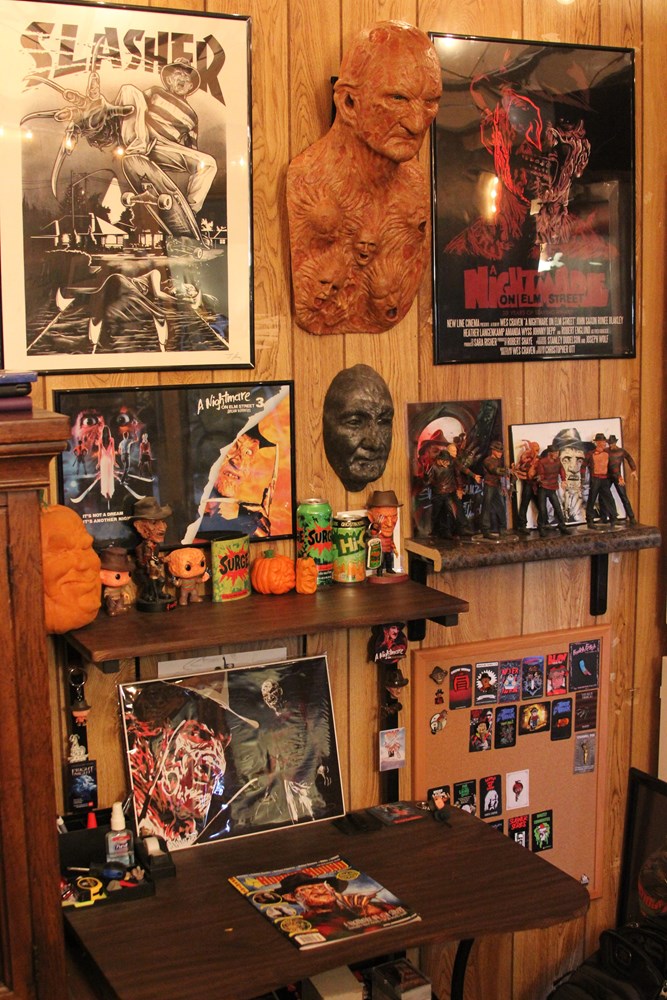 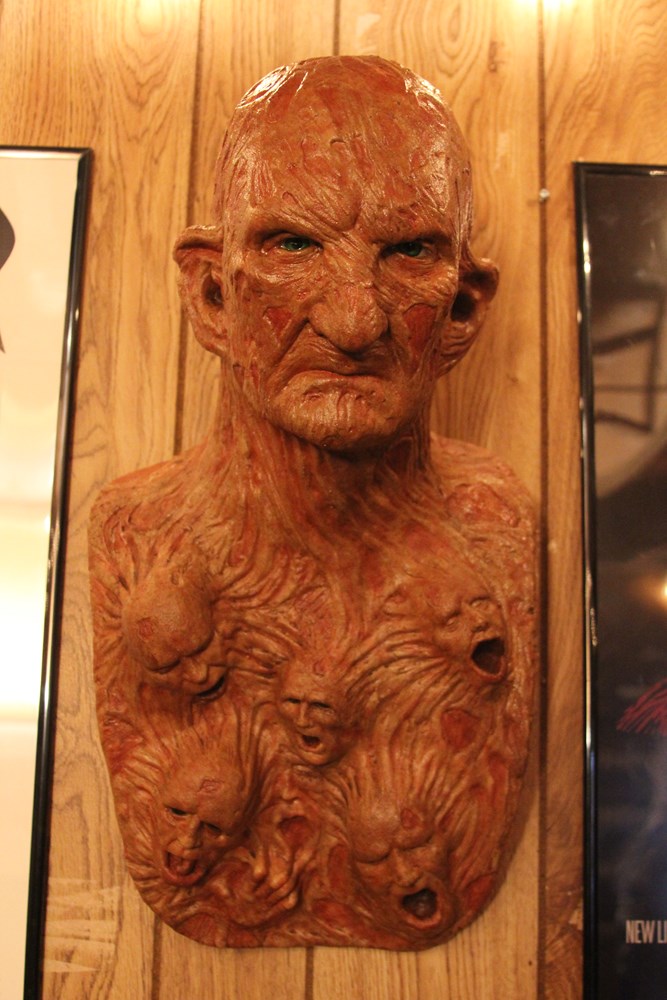