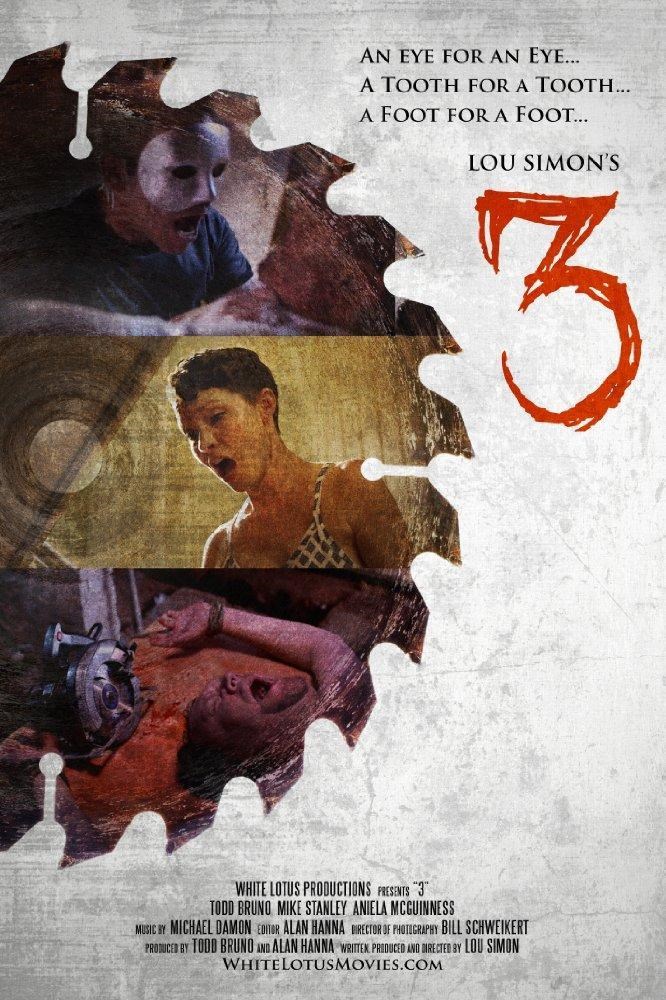 The HorrorHound Film Fest (H2F2), as part of HorrorHound Weekend (Sept 8-10, 2017, Indianapolis, IN), will once again be screening the best in independent horror from around the world.  As part of H2F2 Indy 2017, we are proud to announce the screening of Lou Simon's 3.

This is the latest
film by the prolific latina filmmaker, Lou Simon. She always brings complex
emotions to her films, and 3 in by
far the pinnacle of cinematic emotional experience in her catalog. What would
you do if someone you loved was viciously raped and mutilated … and the
perpetrator walked free?  At what lengths
would go to make sure that not only justice, but also vengeance was served? 3 is a disturbing and intimate
exploration of that line between recompense and revenge.  With very few actors, the film allows for
deep character development without seeming bogged down by it.  A “character-piece” is often a slow-burn … not
in this case.

A well-known doctor is abducted and imprisoned.  He is imprisoned by a man who is seeking
justice.
He wants a confession from the
doctor, a confession of rape.  The man is
doing this for the benefit of the woman he loves, who is the victim of the
doctor.  He will use any means necessary (coercion,
drugs, torture, starvation, etc.) to get the confession, to video record it,
and to turn the recording and the doctor over to the police.

As the story progresses, and we learn more about the characters
and their relationships with each other, everything that seemed stable
erodes.
Things that seemed chaotic
somewhat normalize.  And, reality becomes
a blur. When the truth is revealed, you are left with need to take a minute to
process what just happened.  3 is a great story with exceptional
performances and spot-on SFX.  Though the
film would have benefitted from better cinematography and scoring, it doesn’t
detract too much from the experience of watching this movie.  Simon is quickly becoming the master of
cinematically harnessing the essence of human experience in its most raw and
visceral forms.