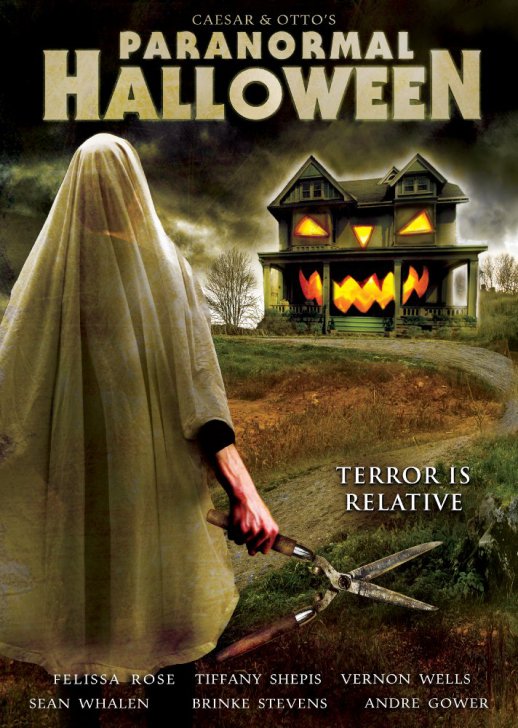 Dave Campfield is cut from a very special cloth. A
master of the horror/comedy hybrid for over a decade, Campfield has made his
mark in horror with not a scream but a laugh. Not as widely known as it should
be, the Caesar and Otto franchise has amassed six entries including two short
films and now four features. Brought to life in the fashion of classic comedy
duos like Laurel and Hardy, Tom and Jerry, Abbott and Costello and the
dysfunction of the Three Stooges, Campfield and long-time partner in comedy
crime the endearing and bumbling Paul Chomicki have continued to make audiences
laugh, jump, twist them around and say what the f***!? Having his hands in
every aspect of the filmmaking process including being the writer, editor,
producer, actor, and director, the Caesar and Otto film franchise odyssey is a
journey for viewer as it continues with the very smart, sharp, and overall just
enjoyable latest chapter Caesar and Otto's Paranormal Halloween.

Put out by Wild Eye Releasing, this story returns us
to Caesar who is still working on that screenplay, finding the girl and being a
typical pain in the half-brother to Otto who is just moving through life and
looking for love. With things in flux and the half-brothers being so damn
opposite as well as heroic, the half-brothers take up an offer to house sit at a
residence that is supposedly haunted. They make themselves at home as dangerous
and malevolent forces appear including ghosts, spirits and mysterious house help
that may or not be that love connection the duo has been looking for. Caesar
and Otto are joined by their dysfunctional, dead-beat dad who, like the previous
entries, lead the half-brothers into harm and humor. As both half-brothers face
their demons (literally and figuratively), they must come to grips with their
origins, place in the world, limits and future. They are joined by a list of
celebrity cameos and roles including long-time Caesar and Otto cast and CKY
musician Deron Miller who plays Father Jason Steiger. Other cameos include horror
features like Felissa Rose, Tiffany Shepis, Beverly Randolph, Vernon Wells, and Sean
Whalen.

Caesar and Otto's Paranormal Halloween is a fun
popcorn hybrid that for me seems to get better with each chapter. While the
story falls on the same themes, gags and molded characters, that does not stop
Campfield from creating another successful chapter in the franchise with the
skills he has, resources available and people who have come to trust in the never-ending
engine that is this filmmaker. The film never grows tired which I cannot say
for many genre films whether they infuse comedy or not. Not only with this
latest entry but with the franchise itself, Campfield is honest and
self-reflective on his place in the filmmaking world, pressures, sticking to
the formula for success and how the reality is for most for indie filmmakers of
any kind. Caesar and Otto's Paranormal Halloween’s immerses itself in the
homage pool of horror classics like The Exorcist, The
Amityville Horror, Sinister, Insidious, The
Shining, and more. Hell, Campfield even throws in some John Steinbeck!

Yes, there is overacting! Yes, at times the
characters can be annoying! Yes, it is a gateway horror film for the younger
generation! Yes, it's B rated and cheaply wonderful! However, in the same vein
as the modern, low-budget, midnight movie filmmakers like Mike Mendez, Ryan
Scott Weber, James Balsamo, and more, Campfield makes his vision come to life.
He is able to garner names to sell the film, stays true to the franchise core,
can successfully bridge comedy and horror as well as create characters that
balance each other out creating a film that is worth going back to. Caesar
and Otto's Paranormal Halloween has its memorable moments, twists, jumps, and
an energized soundtrack that is the pulse for the film and adventure of these
half-witted brothers!

In an ocean of low budget horror, Caesar and Otto's
Paranormal Halloween and the films of Dave Campfield are a nice way to spend 90
minutes or possibly longer as you watch the interactive credits. The Wild Eye
Releasing DVD offers a slew of extras that are entertaining, informative, and show the
passion and insanity Campfield offers to you the fans and tribute to the talent
he has for this craft.