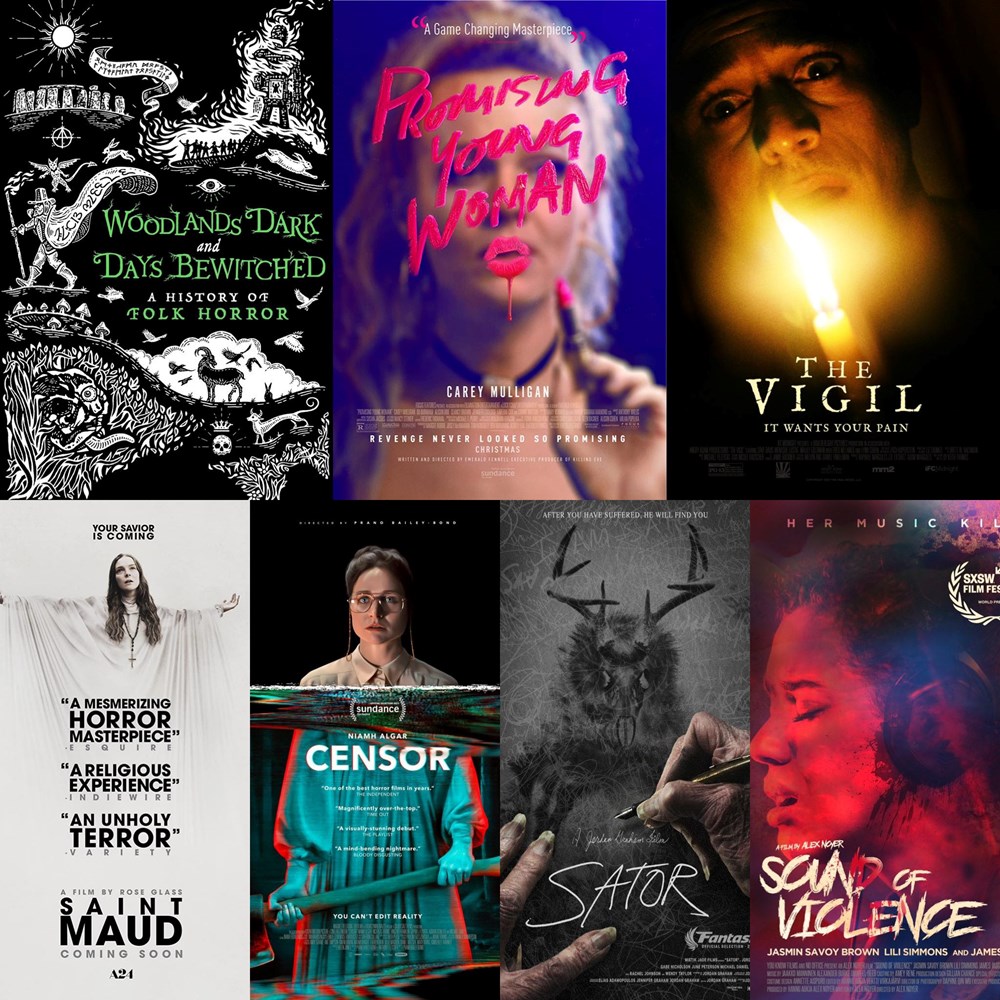 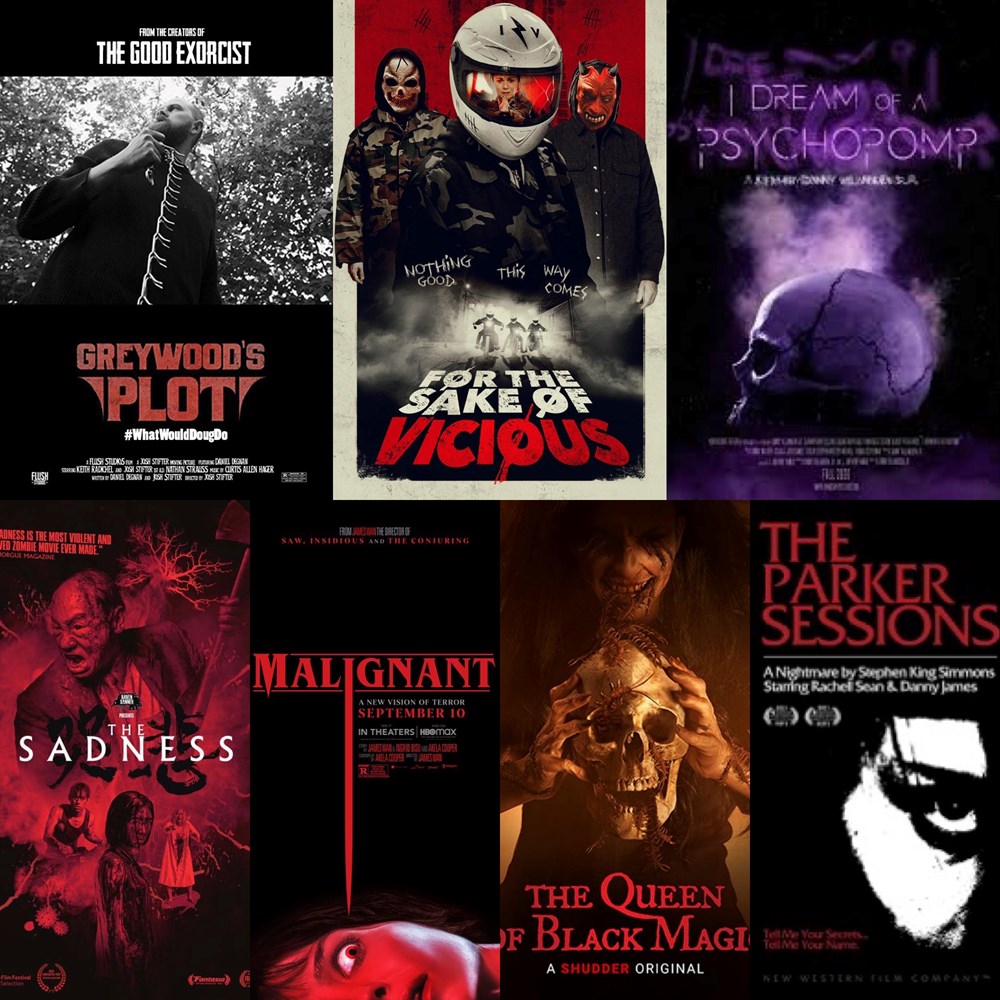 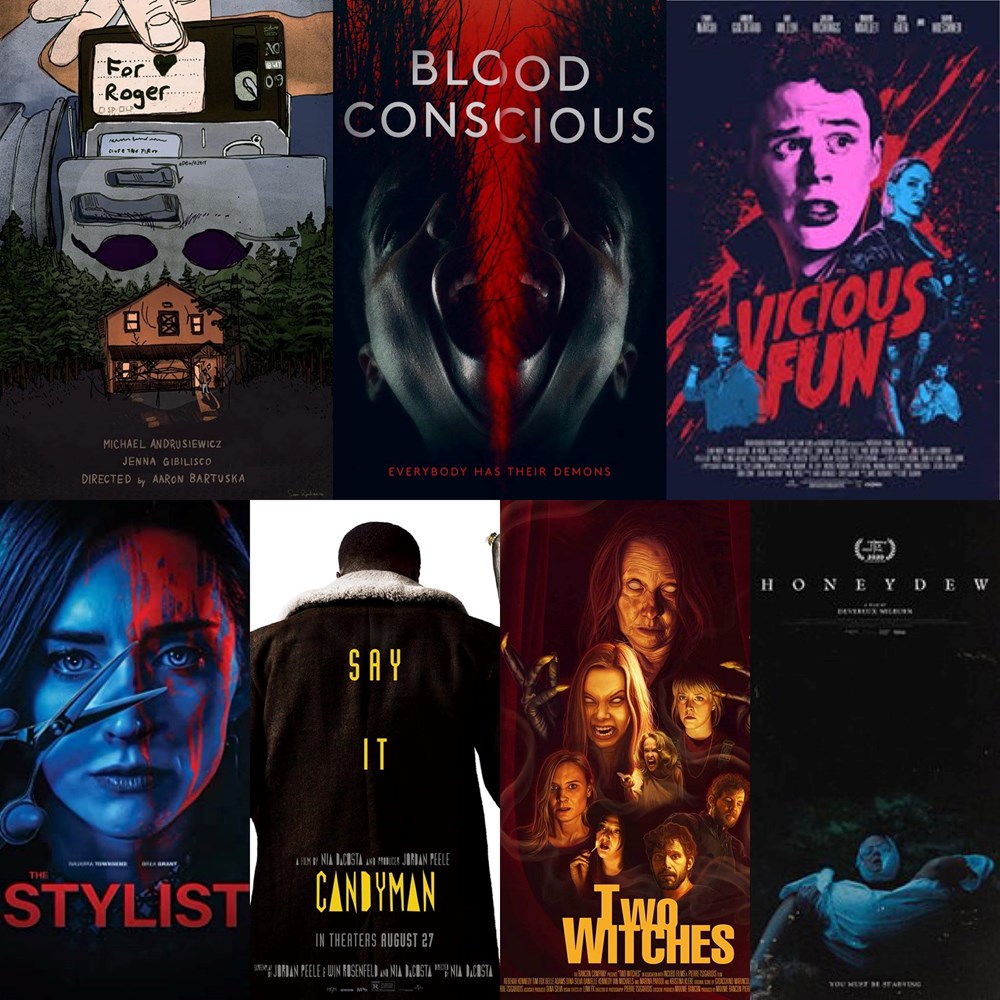 My Top 28 Favorite Horror Genre Film List is based off of a 2021 U.S. wide release or having seen at film festivals during 2021. I added a few more films that I was on the fence about but deserve to be included! Thanks for reading and sharing.

1. The Feast (Lee Haven Jones) - This was my number one for a good portion of this year. The Feast is a film that makes you wonder and question throughout. It is a very frightening film that is not afraid to push the boundaries and challenge. The narrative is simple, driven, and when it finally unleashes hell, there is no stopping it.

2. Initiation (John Berardo) - My surprise hit of 2021! Wrapped in what looks like the typical modern slasher film, Initiation is so much more tackling issues and themes that not only connect to great horror storytelling, but the world around us. This film is smart and does something most in this sub-genre don't do, it has characters that you can invest in, inventive kills that are more than show, and a great sense of misdirection throughout that connects to the story. It left me surprised and satisfied.

3. The Medium (Banjong Pisanthanakun) - WTF! Like The Queen of Black Magic, Asian stylized horror storytelling is some of the best each year. This entry from Thailand and South Korea is powerful and unsettling. A great horror story done right about exorcism, obligation, and what happens when you let the demon out of the box! A standout performance from Narilya Gulmongkolpech!

4. Ghosts of the Ozarks (Matt Glass & Jordan Wayne Long) - A supernatural western that takes place after the civil war... heard that one before? Ghosts of the Ozarks is something special and magic on the screen. A standout ensemble that infuses a narrative that takes on a variety themes, history, and character driven demons. Powerful and well crafted!

5. An Ideal Host (Robert Woods) - Perhaps the cleverest entry on this year's list. A surprise hit on the film festival circuit; An Ideal Host is more than a dinner party gone wrong. It blends a variety of troupes, dark humor, connecting circumstances, and horror that hooks you and at times cringe worthy. One of the best ensembles of the year and unexpected horror ties that satisfies.

6. Last Night in Soho (Edgar Wright) - One of the few wide released films on this list, but so deserving. Just beautiful and the authenticity is incredible. It has a charisma and a range of fun characters. The film features some great twists and a solid mystery to go along with the interwoven horror elements. A blast for any fan of cinema especially period horror!

7. The Last Matinee (Maximillano Contenti) - A throwback film that is so much fun! A wonderful nod to Italian horror that feels authentic. A welcomed blend of blood, humor, tension, and nostalgia. It is a perfect film to grab popcorn and just enjoy!

8. Woodlands Dark and Days Bewitched (Kier-La Janisse) - Why it is a methodical watch, Kier-La Janisse has put together one of the best horror themed documentaries that I have experienced in some time. It is a detailed and inclusive journey into the prism that is folk horror. It is both an entertaining and educational watch that has something for everybody. Just a wonderful job by Janisse and Severin!

9. A Promising Young Woman (Emerald Fennell) - This one of my favorite films of the year period and I have Jill Gevargizian to thank for that. A Promising Young Woman is beautiful and bright but so wicked underneath. This is my favorite style of horror, even though this is an empowering, dark thriller. It rips you apart throughout, with a powerhouse performance by Carey Mulligan. The film feels kin to Abner Pastoll's A Good Woman is Hard to Find, Hard Candy, and my number one The Feast.

10. The Vigil (Keith Thomas) - I saw this film at the Sitges Film Festival back in 2019 and I was so happy it found a home with IFC. A haunting tale that confronts trauma and unspeakable loss through a religious and supernatural service. A wonderful chamber piece that is more than a ghost story, but a tale of redemption. A great edit and performances highlight a segment of religious based horror that is quality across the board.

11. Saint Maud (Rose Glass) - This film was causality of covid, but it is worth the wait as A24 is the premiere home of quality genre cinema. Shocking and frightening, Saint Maud takes the viewer on a spiraling journey that is raw, disturbing, and dreamlike. Morfydd Clark is a standout as Maud with excellent performances surrounding this complex character and dwelling into faith.

12. Censor (Prano Bailey-Bond) - Prano Bailey-Bond is one of the next masters of horror. A master stroke in visual style and cultivating tension, Censor's story is simple nightmare fuel. The connection and nod to the video nasties is done so well and at times gives the viewer a tense laugh. Just well done!

13. Sator (Jordan Graham) - This film was a personal journey for the filmmaker Jordan Graham and is an unraveling nightmare for all those who experience it. A passion project that walks the line of real horror and the supernatural lore, Sator is methodical and connecting. Gritty, genuine, and frightening, Sator is DIY at its finest.

14. Sound of Violence (Alex Noyer) - Like Censor and The Stylist, Alex Noyer took his award-winning short Conductor and created a horror feature that will linger with you. Telling the tale of a young woman who is dealing with the effects of a brutal childhood trauma and the ability to see the spectrum of sound, Jasmin Savoy Brown is masterful in her role as Alexis. This film challenges the audience to go on this journey that is obsessive, passionate, beautiful, and horrifying.  The sound work and score are standouts on so many levels and is needed to be experienced in theatre or with quality headphones.

15. Greywood's Plot (Josh Stifter) - In the dark vein of Tusk and The Island of Dr. Moreau, Josh Stifter and creative partner/actor Daniel Degnan tap into backcountry horror. A tale of body horror, psychological horror, and monster lore, Greywood's Plot is the micro budget film that needs to be seen and appreciated for all the distributing beauty it creates. Unexpected and a modern mark of DIY filmmaking.

16. For the Sake of Vicious (Gabriel Carrer & Reese Eveneshen) - Balls to the wall violence and brutality! The latest from Gabriel Carrer and Reese Eveneshen throws you down the staircase of classic exploitation cinema. For what it lacks in narrative, it makes up for in pure fury and body numbing action violence. Actor Nick Smyth stands out here in one of his most physical roles to date.

18. The Sadness (Rob Jabbaz) - If you love zombie films that cross the line and are an attack on your senses, this is your bloody cup of vodka! A surprise hit on the festival circuit; this badass horror debut from Taiwan that pushes all the right buttons. Clever use of the zombie troupes and full-on gore! The Sadness is a film that does not care about character development or story, it wants the action, sexuality, and virus to take center stage!

19. Malignant (James Wan) - Wan is the crown prince of modern horror cinema. A surprising modern take on giallo that does not hit you over the head with it, but keeps you engaged. A superb performance by Annabelle Wallis and her stunt double that infuses some crazy stunts and action. A great twist that will make you glad you watched it.

20. The Queen of Black Magic (Kimo Stamboel) - Anything Joko Anwar is connected to, sign me up! A layered horror narrative that pays off with gore, twists, and balls out Indonesian horror bliss! This is a great example of horror being used to face real work horrors and hitting the mark.

21. The Parker Sessions (Stephen King Simmons) - Unsettling from almost the start. The film is a dark drama that crosses over into horror without any warning. Great performances and chemistry that will get under your skin. A really clever film that shows how great character development and story can rise about the typical horror troupes and actions.

22. For Roger (Aaron Bartuska) - This debut feature is so much more than a horror tale within the woods. Emotional and tense, For Roger is a human horror film that will linger with you. Very resourceful and stand out project that comes from student roots. Unexpected with a progression that means so much.

23. Blood Conscious (Timothy Covell) - A very unexpected film that amps up the tension and misdirection throughout. Great cast and narrative! The paranoia is palpable.

24. Vicious Fun (Cody Calahan) - Black Fawn Films never seems to disappoint and their latest entry is another example. Clever and sharp, the cast is superb with several standouts! Just a lot of fun and welcomed horror surprises. A great job of finding the balance of horror and comedy.

25. The Stylist (Jill Gevargizian) - Najarra Townsend stars here as the damaged, central character "Claire." Gevargizian's talent is on full display with her crew returning from the award winning short this feature was based off of. A great build of suspense and a worthy investment in Townsend's performance. The ending is epic!!!

26. Candyman (Nia DaCosta) - I was very leery about this film and how they were somewhat reinventing the Candyman lore. I spent my money to see this in the theater and I was happy I did because Candyman is just visually arresting. The film blends so much artistic expression and feels like the true fable, where terrible things happen against macabre beauty. Why I think the story was not up to the standards of the production, the film has an aura about it with a cast that is great including Yahya Abdul-Mateen II take on the candyman.

27. Two Witches (Pierre Tsigaridis) - This is a fun film that does not mind getting messy. However, the entry to my favorites list is based off of the wicked and wonderful performance of Rebekah Kennedy. Just a lot of fun and a nice take on the sub-genre of witchcraft.

28. Honeydew (Devereux Milburn) - This bizarre tale caught me off guard. The visual style, unsettling story, and unique soundscape are the foundation for how horror should always be. Nothing good will happen no matter what you do. The simplicity is a model that filmmakers should study up on.

My Heart Can't Beat Unless You Tell It To