Mars Attacks has become its own cult standard of art, film, comics, and has inspired just as much other content.  These creepy aliens who are somehow both horrifying and adorable at the same time began with a trading card line in the 60s and returned to attack the human race in the 90's thanks to Tim Burton's off the wall film of the same name and a return of the trading card lines.

Since then the martians have invaded comic books and returned to the land from which they spawned in even more graphic and colorful detail thanks to Topps creating new fantastic Mars Attacks cards.

In 2015 a line of cards landed on Kickstarter known as Mars Attacks: Occupation and would be a smash success, bringing together some amazing artistic talent like Ed Repka and Bob Larkin.  It would even see the martians come up against Judge Dredd.  Collectors went crazy for the extras and the card set which had some brutal deaths for the humans involved.

Well, the time has come for the martians to land again and this time there is an UPRISING.  Topps has teamed up with Sidekick Labs to bring a new set of cards and extras for the martian junkies we all are deep down inside.

Mars Attacks: Uprising will showcase the talents of Ed Repka, William Skaar, Carlos Valenzuela, and Paolo Parente and will have a ton of extras depending on which backer level you choose including a beautiful binder, collectors box, and special sketch cards just to name a few.  Just added to the collection is a special Garbage Pail Kids Mars Attacks trading card set which you can add on for $10.00. 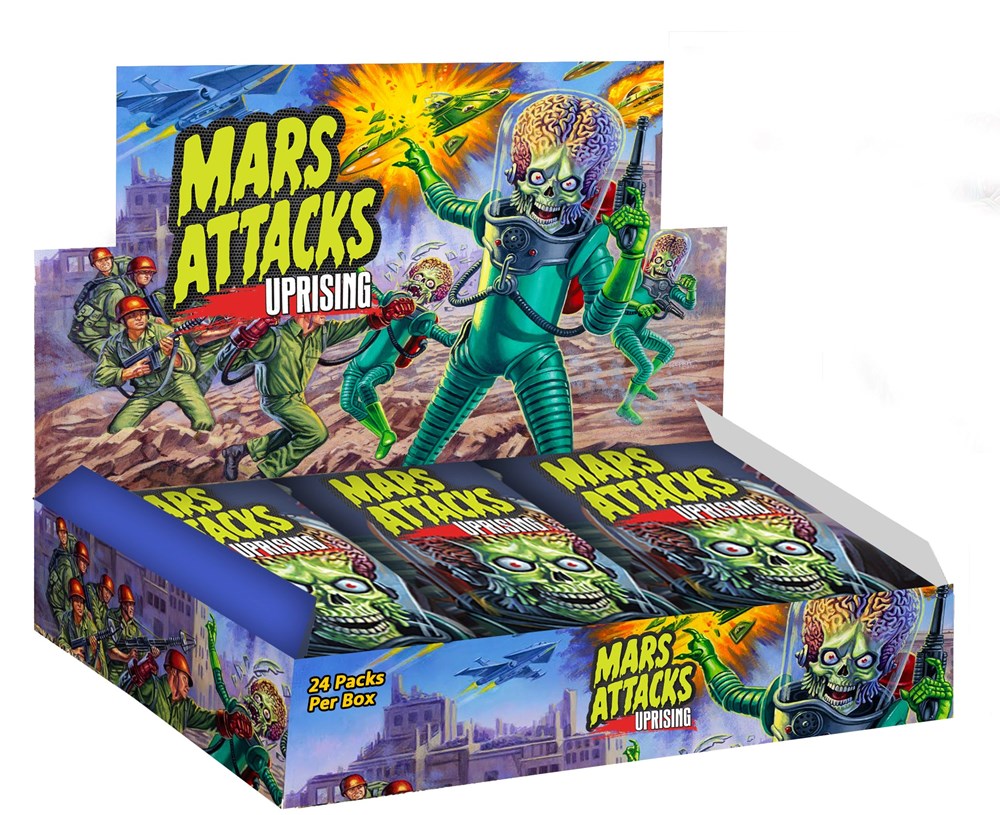 I've seen some of these cards and they're absolutely beautiful and each one has super detailed story about what the card itself is showing you on the back that contributes to the whole card lines saga.  There's a lot of love to be found here for these homicidal aliens.  I spoke with the card lines co-martian captain Adam Levine about this project and how it came to be.

HH:  I love the fact that there is a story being told within these cards.  What comes first, the artwork or the story?

AL:  The idea comes first, but not
necessarily the story!  It starts with a
list of ideas for cards that I have brainstormed with friends and artists over
the past year or so.  Soldiers storming a
beach, giant carnivorous plants, a human with energy gauntlets, a cybernetic
warrior decapitating a Martian— and then I pick which artist I think best suits
which idea, and start working with them to refine the imagery.  When the art is complete, I compose the text,
drawing from both my original concept, and the details of the finished piece.


HH:  When
you have multiple artists working on a series like this what is the
collaboration like as well as the process for managing it all?

AL:  It’s not easy!  I have a form with all the card ideas, and
I’ve assigned them based on their style, the subject matter I think they work
best with.  William Skaar is terrific
with monsters, Ed Repka does the best pulpy horror, Paolo Parente is perfect
for military scenes, that sort of thing.
But I don’t limit it to just that— it’s always exciting to give artists
something new and different than what they’re used to, as well.   When the work is assigned, I work with them
closely, and let them play with the idea, make changes they think will improve
the concept, and then we go back and forth through a few stages: pencils, inks,
color, and finished painting, making little changes here and there along the
way.

HH:  I
really like the inclusion of Garbage Pail Kids into this.  How far in advance do you have to decide to
include something like that for the campaign?

AL:  The idea to mash up GPK with
Mars Attacks originated back in 1986 actually— the classic GPK card, “Alien
Ian” was a Mars Attacks parody, after all!
So when we were developing the set, we talked with Topps about doing a
small pack of cards with that character.
Topps has been a very supportive licensor, and has been allowing us
great freedom to do some really cool and different things with this project,
including the GPK pack.  But to answer
your question, while we first approached them last summer about GPK, it wasn’t
until the day before we released it on the campaign that we formally requested
approval, and they were gracious enough to give us a very quick ‘yes!’

HH:  What
is It about Mars Attacks that keeps fans loving it in your mind?

AL:  I think the appeal is a
little different today than it was in 1962, but the one thing it’s always had
that draws people in is its subversive imagery.
In 1962 the idea of selling bubblegum cards to kids that showed some
fairly graphic violence and salacious images of damsels in distress, was
controversial to say the least.
Congressmen called Topps to complain, and it was largely removed from
stores shortly thereafter, adding to its infamy.  Today, I think the classic pulp horror can
sometimes feel quaint in a world populated by graphically violent shows on
television like The Walking Dead or The Boys. But that same pulp horror is what
makes it unique, because whether it’s 1962, or 2020, the imagery is what
attracts people.  It’s just as unique and
enticing now as it was then, but maybe for different reasons.

HH:  What
began your fascination for trading cards and what is your most prized
non-sports card that you own?

AL:  Like many fans my age, I
think my awareness and love of card collecting started in 1986 with Garbage
Pail Kids!  I had some very liberal
parents, and unlike many, they never forbid me from having them, so I have
vivid memories of a Tupperware container full of GPK stickers on my bookshelf
(it didn’t hurt that I shared my name with the most famous GPK of all).  As I got older and my attention turned to
comics, I collected Skybox’s Marvel Universe cards.  My most prized card though?  I’m probably biased, but the ones I prize
most are the ones I helped create— from 2012’s Mars Attacks Heritage chase
cards, to 2013’s ‘Mars Attacks: Invasion’ and 2015’s “Occupation.”  I fall more in love with each new card I
create so right now my personal favorite card in my collection is Ed Repka’s
“Attacked by Plants."

Mars Attacks: Uprising is still avail to back on Kickstarter through March 3rd.  You can do so now here