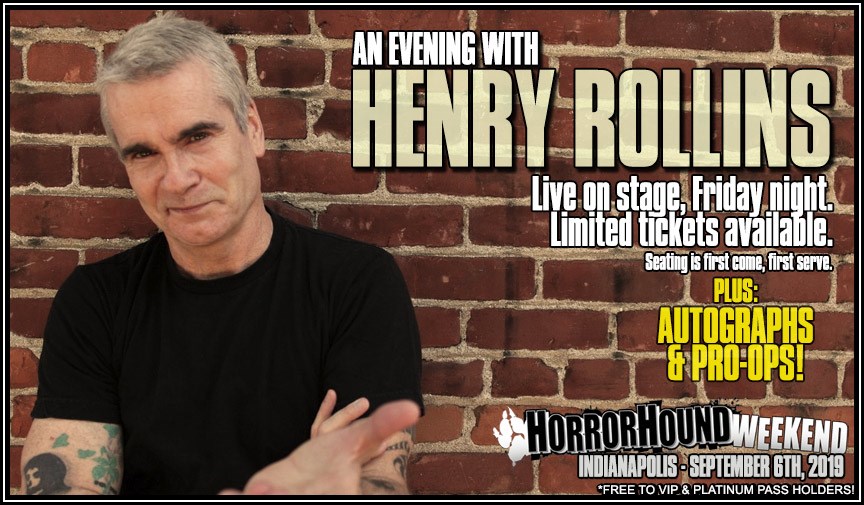 We are thrilled to announce that Henry Rollins is returning to HorrorHound Weekend ... but this time, in Indianapolis! Oh yeah ... and THIS TIME, Henry has agreed to participate in the show via autograph and pro photo op sessions! You read that right!

Friday Night at HorrorHound Weekend: Cincinnati – at the Westin Indianapolis (241 W. Washington St. Indianapolis, Indiana 46204) – located across the street from the Indiana Convention Center! Tickets are general admission – only $35 (does not include ticket price of HorrorHound Weekend). Doors are expected to open between 8:30-9:00pm. Show begins at 9:30pm*
This Friday night event is extremely limited and expected to sell out. Seating will be general admission (first come, first serve)***
Furthermore, on Friday ONLY, we will be offering a limited number of BUNDLE options that include a ticket to his Friday evening show, an autograph, and a pro photo op. Single ops and autographs will also be available (a very limited number will be offered and are expected to sell out). Tickets, autographs, and pro ops will go on sale next week. Keep an eye out on the official HorrorHound Facebook and Twitter pages for updates!
About Henry Rollins:
In describing Henry Rollins, the tendency is to try to squeeze as many labels as possible into a single sentence. "Rollins is many things," says the Washington Post, "diatribist, confessor, provocateur, humorist, even motivational speaker…his is an enthusiastic and engaging chatter." Entertainment Weekly's list includes "Punk-rock icon. Spoken word poet. Actor. Author. DJ. Is there anything this guy can't do?" TV Guide has more concisely called him a "Renaissance Man" – but if Henry Rollins could be reduced to a single word that word would undoubtedly be "workaholic."For better than a quarter century, Rollins has toured the world as a spoken word artist, as front-man for both Rollins Band and Black Flag and – without a microphone – as a solitary traveler with insatiable curiosity bypassing the resorts in favor of places like Siberia, Senegal, Burma and Bangladesh.When he's not living out of a backpack, Rollins is constantly at work as an actor, radio DJ, author of more than 25 books, and running his publishing company and record label 2.13.61. Henry currently hosts a weekly radio show on LA's renowned NPR affiliate KCRW, is a regular columnist for LA Weekly and Rolling Stone Australia. In recent years has hosted several TV shows for National Geographic, including 2012's three-part series Animal Underworld with Henry Rollins.
*As always, event times are tentative and subject to minor changes. In any case of adjustments, any alterations will be clearly posted on www.horrorhoundweekend.com.
**  This is a live stage event only. No photography will be allowed during the performance. No recording of any kind.
***Admission into An Evening with Henry Rollins is included with the purchase of VIP/Platinum tickets (VIP/Platinum pass holders do not need to purchase tickets). Special Platinum Seating will be held and made available to Platinum Pass holders. VIP ticket holders will be allowed entry prior to regular ticket holders (general admission). All seating is first come, first serve in this order. Front-of-room seats will not be held for VIP ticket holders. To utilize VIP early-entry seating, VIP ticket holders must arrive to Q&A panel/event room at the Westin Indianapolis (241 W. Washington St. Indianapolis, Indiana 46204) prior to doors opening.
**** A ticket to this event doesn’t grant you access to HorrorHound Weekend. A single day, weekend pass, VIP or Platinum HorrorHound Weekend pass is required to attend this event in addition to this event ticket.
***** Age Restriction: No one under 16 will be admitted.

Discounted pre-sale for HorrorHound Weekend ends August 20th! After that – tickets will still be available online at their full retail price up until showtime. (Early admission, VIP, and Platinum passes are sold out.) So order your tickets before August 20th to save some dough! And don't forget to tell your fiends! Visit www.horrorhoundweekend.com today!