*Full Time Schedule Posted at BOTTOM of page:
HorrorHound is excited to announce the lineup for the HorrorHound Film Fest (#h2f2) as part of the upcoming HorrorHound Weekend (#hhw), March 15-17, 2019 in Cincinnati, OH. Once again, we have scoured the globe to find some of the best in horror, sci-fi, and dark comedy. Keep eyes open for the screening schedule. Go to the HorrorHound Weekend website for details about the film fest, convention, tickets, and lodging.

Brutal  survival ... what would you do to remain Alive? 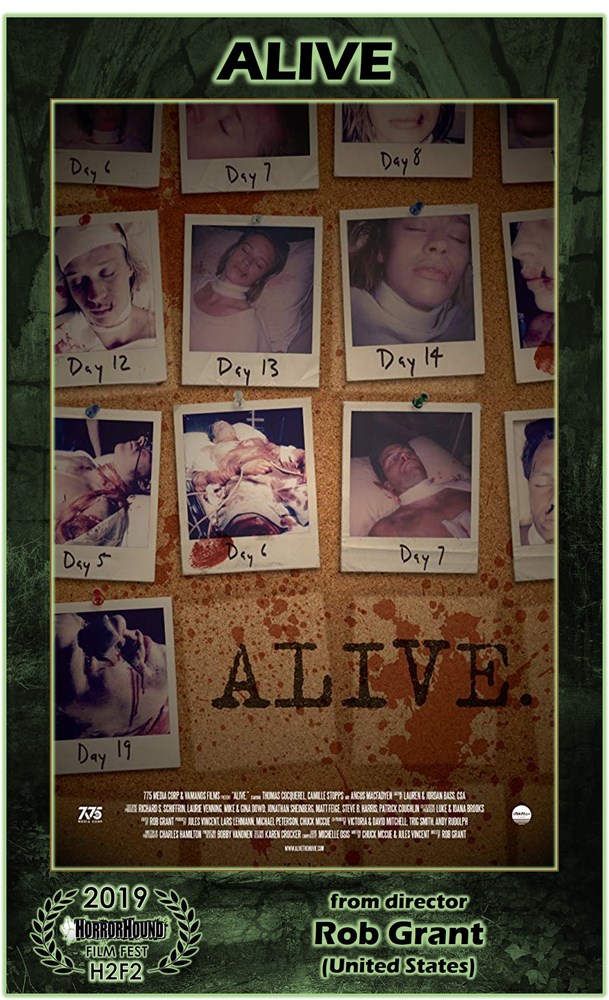 A severely injured man and woman awake in a abandoned sanitarium only to discover that a sadistic caretaker holds the keys to their freedom and the horrific answers as to their true identity.

ALL EYES ON YOU

A surreal, bizarre cat and mouse in a maze of the dark city streets on Halloween.

The silent loner Marco is dreaming about a girl ever since they met; but, she seems to have disappeared. On a cold Halloween night, he searches for her in the streets again. Chased by a mysterious man, he soon discovers the darkest secrets of the city, initiating a nightmarish race against time. 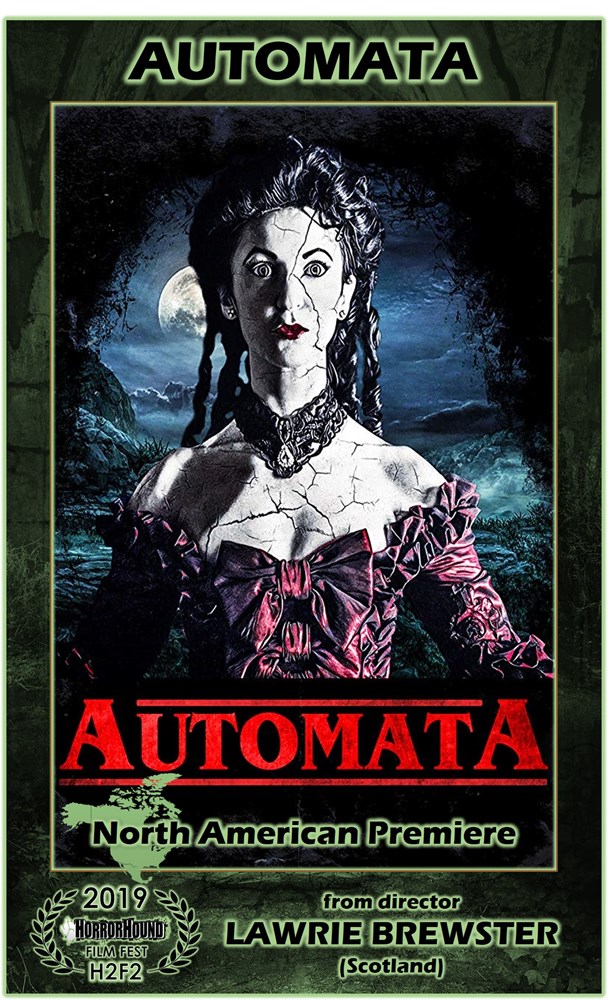 Antique expert Brendon Cole is sent to authenticate a 300-year old clockwork doll with a notorious history, aka "The Infernal Princess". In the remote Scottish mansion where it was discovered, Brendon soon finds himself the victim of the automaton's legendary curse.

A psycho-sexual de-evolution of the mind. The Bad Man will sty with you for a long time. (Warning - nudity and strong sexual content) 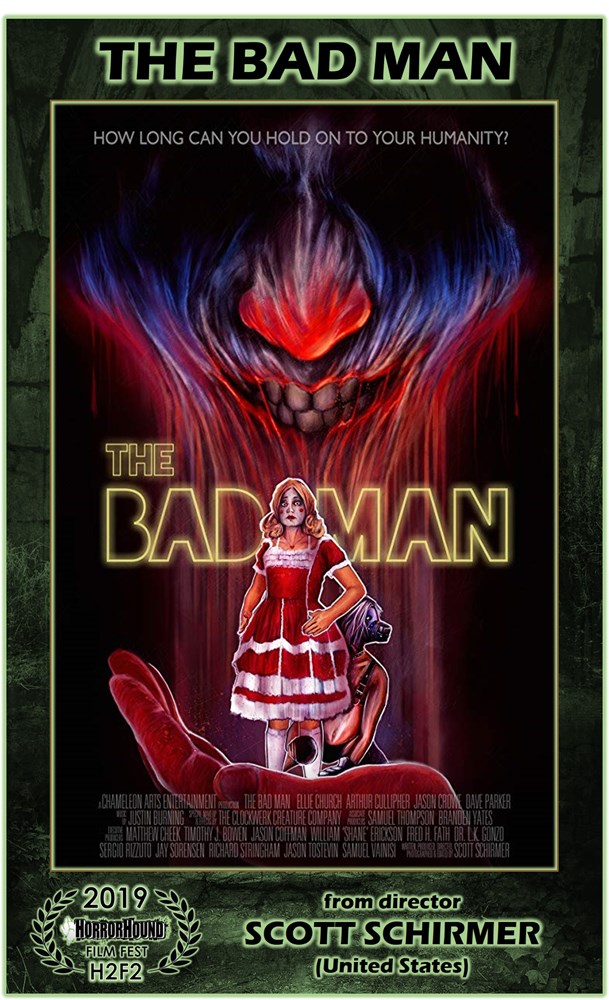 Mary and PJ are kidnapped and tortured by a sadistic clown bent on transforming into a "doll" and a "dog" - servile sex slaves that will be sold to the highest bidders. When PJ goes mad, Mary becomes the couple's only hope of survival. But, can she find a way out before they get lost forever?

A cast of horror all-stars, deranged vengeance, and lots and lots of blood.

The annual hazing of a local "freak" goes too far. A traveling carnie discovers the attack and takes matters into his own hands. Starring Tony Todd, P.J. Soles, Courtney Gains, and Pancho Moler.

If you are a fan of the brilliance of Troma films, you cannot miss CarousHELL! 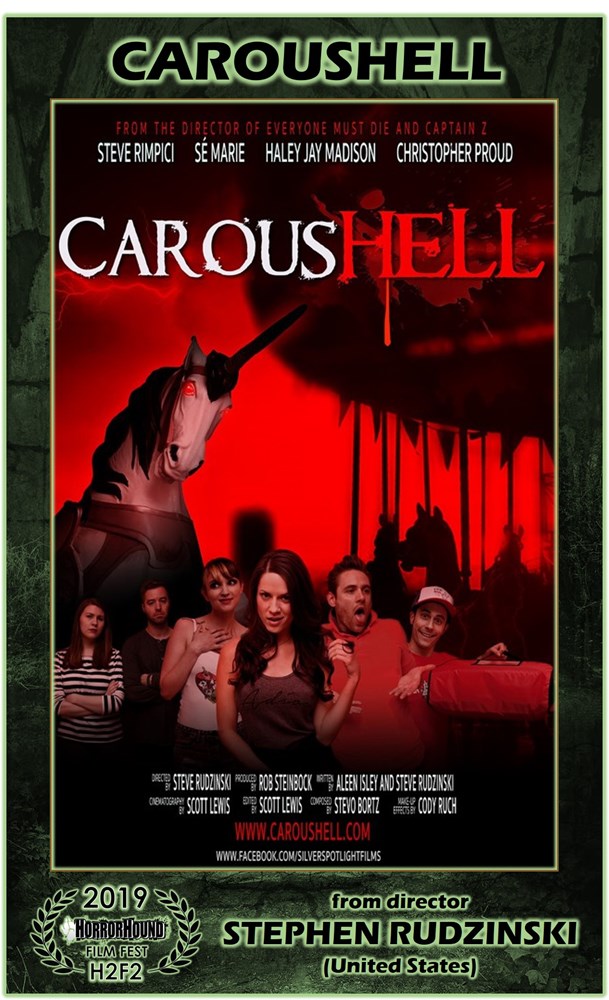 Duke hates his job. He has to let kids climb on his back and ride him for hours every single day. But, one brat finally pushed him too far. Duke has broken free of his ride and is on a bloody rampage of revenge. He's going to murder that kid and anyone that gets in his way.

Recommended to H2F2 by Michael Gingold.

After inheriting her grandfather's house, Alysa must confront the mystery of his sudden death and the evil that hides inside. 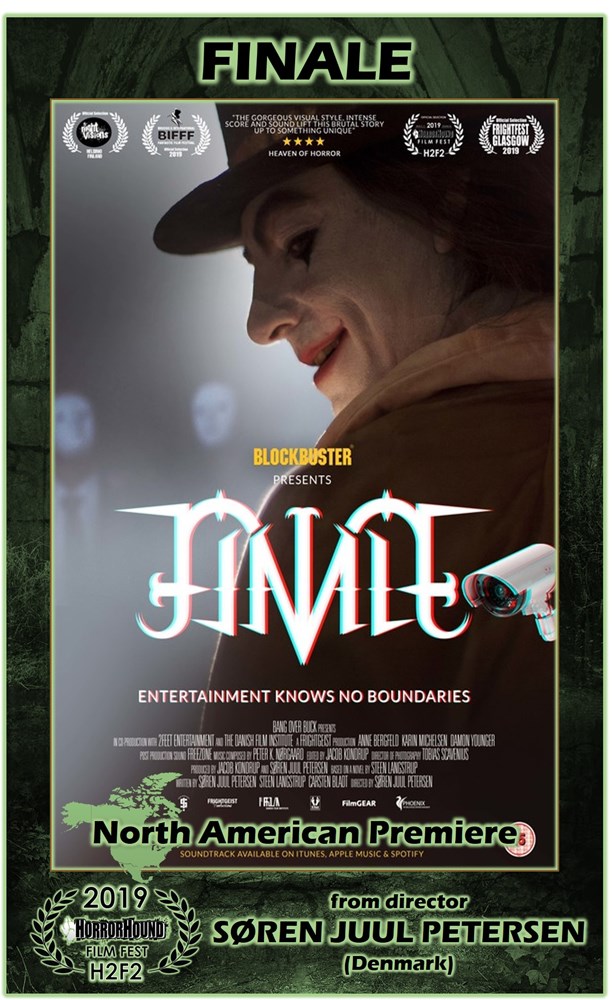 A quiet, desolate night. A small gas station is being tended by two young women. Unfortunately, no customers means no witnesses.

The master of reality gore (August Underground) goes from shocking you to completely deconstructing your mind.

A veteran newscaster desperate for rating secures an interview with a mass murderer on death row the night before the man is set to be executed. What our newscaster thinks will be an easy ratings boost turns into a dangerous psychological game between two manipulative alpha males.

THE HOLE IN THE GROUND

Presented by A24. The Hole in the Ground recently premiered at Sundance.

Trying the escape her broken past, Sarah is building a new life on the fringes of a backwood rural town with her young son Chris. A terrifying encounter with a mysterious neighbor shatters her fragile security, throwing Sarah into a spiraling nightmare of paranoia and mistrust ... as she tries to uncover if the disturbing changes in her little boy are connected to an ominous sinkhole buried deep in the forest that borders their home. 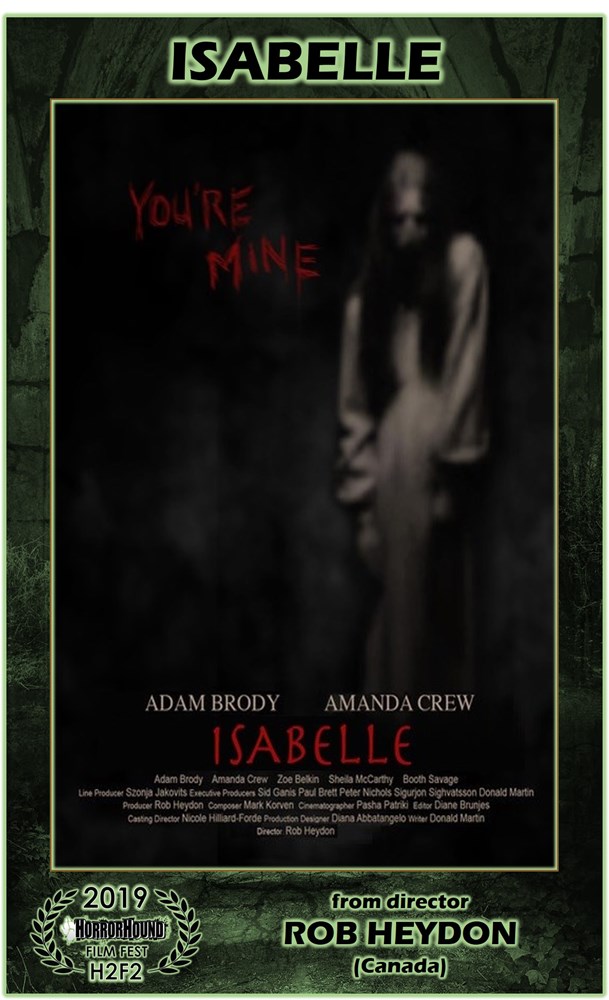 A young couple's dream of starting a family shatters as they descend into the depths of paranoia and must struggle to survive an evil presence that wants nothing more than their very lives.

The internet has become a powerful tool for evil. 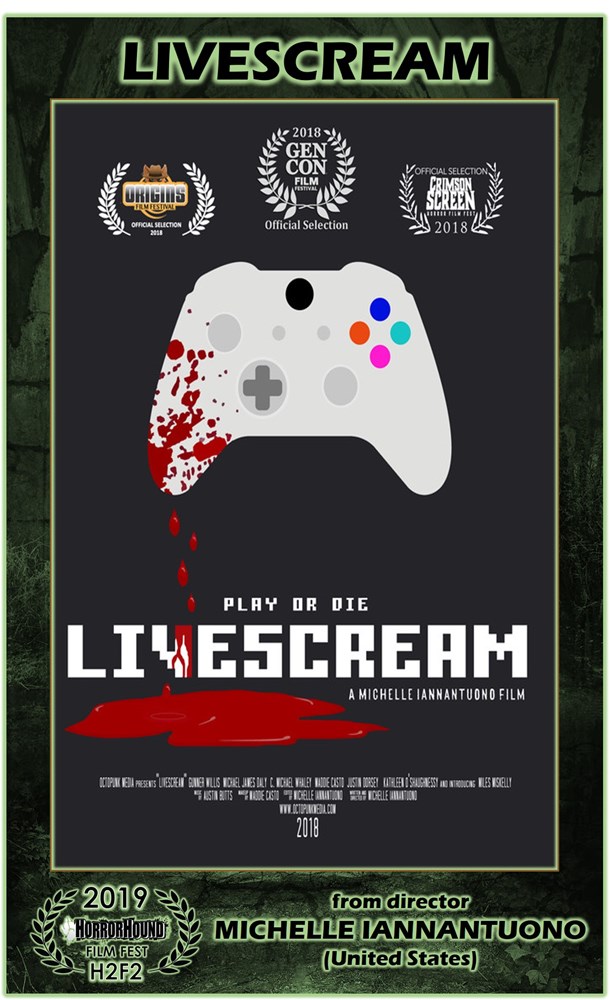 A popular video game streamer accidentally starts playing a haunted game, with deadly consequences for himself and his fans

MY SOUL TO TAKE

The perfect film for the whole family. If you're bring your kids to HorrorHound Weekend ... definitely don't miss this! 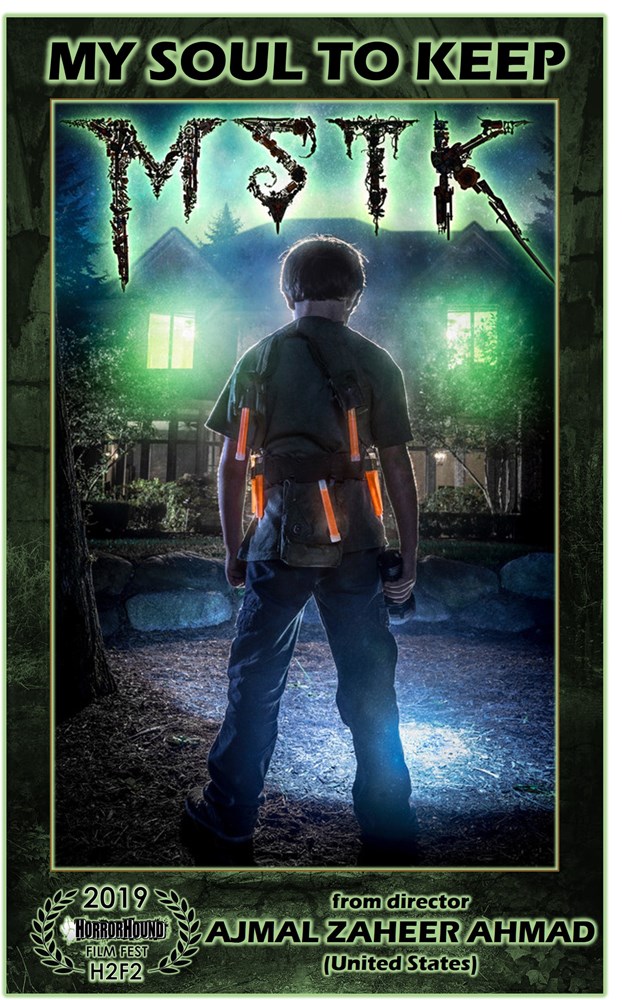 Like many 9-year old boys, Eli believes something menacing lives in his basement. When his older sister leaves him alone one night, Eli discovers if this evil is real or all in his head. What Eli confronts may end up being far more terrifying that even his worst nightmare.

A crime scene cleanup crew is on the job that turns deadly when they discover that the killer never left the scene of the crime.

Please join us for a Sneak Peek of the first movie from HorrorHound Films.

A ghost hunting team desperate for ratings investigates the holy grail of haunted locations. But, when they awake the evil inside, they open a door that drags them into a nightmare of blood and death. Starring Heather Langenkamp (A Nightmare on Elm Street). 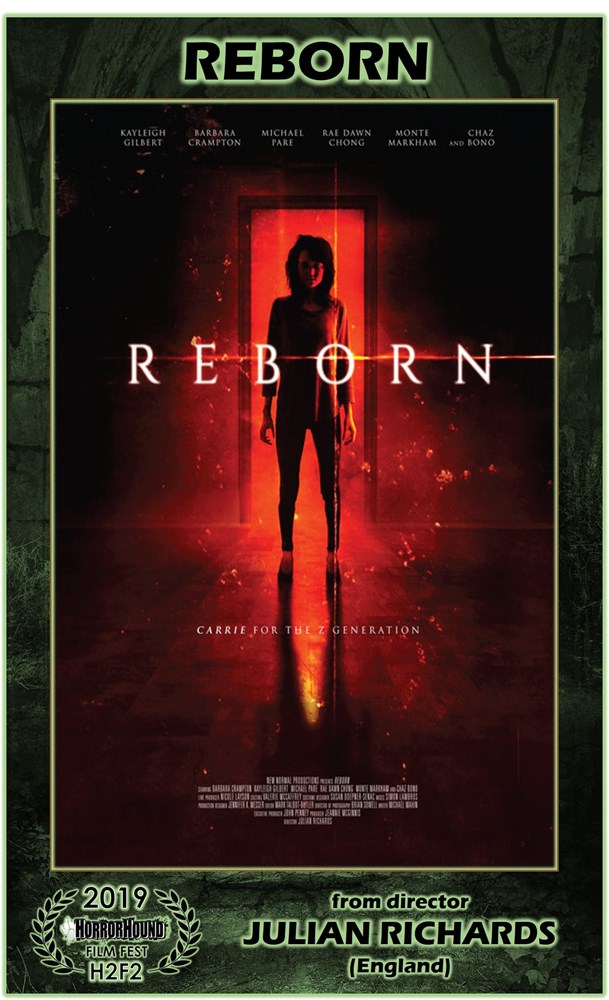 A stillborn baby girl is brought back to life by a morgue attendant using electrokinetic power. On her sixteenth birthday, she escapes her captor and sets out to find her birth mother, leaving a trail of destruction behind her.

Presented by the Horror Host Hall of Fame and hosted by 7-time Emmy Award winning horror host, Fritz the Nite Owl. Remember the days before cable? Remember watching horror movies at midnight? See the cult classic as if it were being presented as a late night horror feature hosted by the duke of cool, Fritz.

A newly engaged couple have a breakdown in an isolated area and must pay a call to the bizarre residence of Dr. Frank-N-Furter.

SKELETON'S IN THE CLOSET 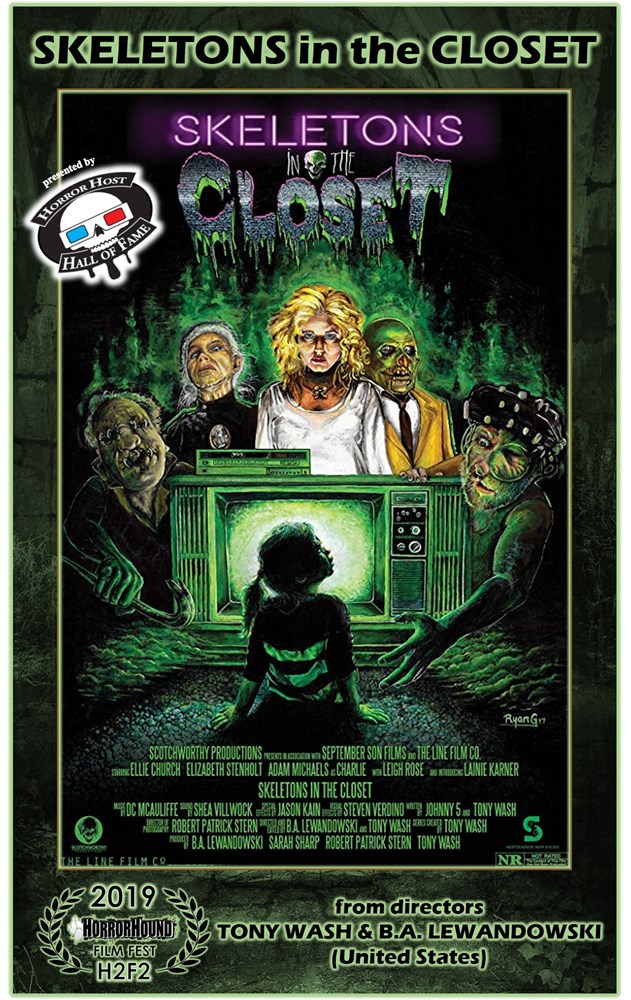 Skeletons in the Closet is a late-night, horror anthology television series during the 80s. The number on fan of the show is Jamie, a precious 11-year old. One Friday night, when her parents are out, Jamie sits down to her favorite show with her less-than-enthused babysitter. The evening takes horrific turn ... and, if they can survive each other, they might survive the night.

Beelzebub, a powerful demon hellbent to possess and consume souls, goes after siblings and their lifelong friends at a rundown country house.

A perfect mix of suspense, intense violence, and punk rock.

A young punk and a houseful of punks square off against the gang of militant straight edgers that he's abandoned.

After a disastrous drunken on night stand, Theresa finds herself drawn into a world of savagery, all the while, tempted by the beautiful and immortal Allison.

A best-selling writer is seduced, then kidnapped by an admirer, who accuses him of raping her 20 years ago and exploiting her personal tragedy as a plot of his latest book. While the author insists that his novel is strictly a work of fiction, the erratic woman relentlessly tries to rip an confession out of him.

Short films will be played before features during screening blocks throughout the film fest.

AFTERPARTY (United States) - Sometimes it's better not to remember.

BIRTH (United States) - A young life for a young life ... the time has come to pay the dept.

THE BLOOD IS THE LIFE (United States) - Give your blood to us ... NOW!

BLOOD STAINS (United States): Hitchhiking is dangerous for everyone involved.

BOY! (United States) - Serving evil gets bloody; but, can it be real?

THE DESOLATION PRIZE (Canada) - He has finally found love; but, the ghost of the man he killed will not allow it.

THE DEVIL'S PASSENGER (United States) - Led down a road of terror.

ELLY (United States) - A girl agrees to be scared for a school project ... but this terror is real.

GOOD GIRL (United States) - A dog's terror when her ball is stolen.

HAXAN (United States) - In a dark place, something evil comes to life.

HELL GETTING OLD (United States) - A reunion, an elevator, a monster.

HERE THERE BE MONSTERS (Australia) - A young girl must survive fighting monsters with monsters.

I AM NOT A MONSTER (Ireland) - Battling demons for control.

IMAGINE (United States) - Fell the terror of being a toy.

INEXORABLE (Ireland) - A couple tormented by cries of a baby.

L'HOMME ET LA POISSON (Canada) - Who is fishing for who?

LATCHED (Canada) - Never awaken the corpse of a fairy

LEAH'S DREAM (Venezuela) - Please ... let the horror be a nightmare.

MASK OF SANITY (Spain) - Confined and tortured ... is it justified?

THE NEW JERUSALEM '98 (Australia) - Gospel of a dark cult.

ONCE BITTEN (England) - Is the plumber a vampire?

RATTLE (Untied States) - Why is the baby crying? Hell only knows.

RUB ME THE RIGHT WAY (Germany) - A hobo frees a genie.

S (Spain) - Is it truly a mental illness if the terror is real?

SADIE (United States) - Facing the demons of her past, literally.

STIGMA (Spain) - Alex opens the door to his worst fears.

TO CATCH A FLY (Netherlands) - Protection ends in blood.

THE TUNNEL (United States) - Something is luring people into a remote tunnel.

THE WHISTLER (Canada) - Her sister was taken ... is she next?