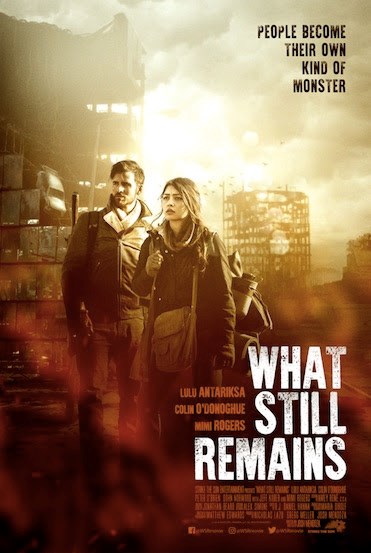 Getting a theatrical release on August 10th, a VOD release on August 14th, and heading to DVD on August 21st, is the dramatic thriller What Still Remains. Starring a cast of seasoned performers like Jeff Kober (The Walking Dead) and Mimi Rogers (Lost in Space) as well as rising talent like Lulu Antariska (Crazy Ex-Girlfriend) and Colin O'Donoghue (The Rite). What Still Remains takes place after an epic and apocalyptic series of events. This film revolves around a 19 year old girl named Anna (Antariska), who has lost her remaining family and is faced with the challenge of fending for herself. Alone and struggling, she meets a mysterious stranger named Peter (O'Donoghue) who is roaming the woods. Anna and Peter build a bond out of both necessity and loneliness. Being rushed through the building of a partnership, we see Anna choose to follow Peter back to his village and meet the people who have come together in the aftermath of the events. The pair must not only be weary of the infected but also the human monsters like "The Berserks" who roam the forest and believe in a pagan god. Dealing with the influence of Peter and the struggle of establishing her own independence, Anna grows as woman. After dealing with some shady characters (father and son creepers) and challenging events (Peter gets injured), we end up arriving at the village. For those who have not turned, or joined the outsiders, become baptized to the way of religion and scripture pushed by the leaders. The village leaves Anna questioning and forced to follow their choices. As she becomes more acclimated, the village must decide the future for her and with "The Berserks" after capturing one. Facing the choices of a life alone, living in the village with Peter or perhaps following the "The Berserks" path,  these events lead Anna to a journey of self-discovery that will not only test her but make her question herself on many levels.

What Still Remains  is very much an emotional drama with thrilling elements. Looking more like horror storytelling and conflict, I was both disappointed and surprised. I was surprised because of how well put together this feature was for a debut director in Josh Mendoza. Not only did Mendoza direct but he wrote and was a producer on the film. What disappointed me though, revolved around a few things. First, why the casting is decent for the roles, I felt that the character of Anna was rushed to following Peter after her family was gone. I felt that this film needed about ten more minutes in the first act to develop their bond and trust. This most likely was result of a first time screenplay and/or an edit that was being conservative. It felt as if the film was based more on the conflicts and what could be then what needed to be developed. The cast features some very talented performers including the ones mentioned above. Kober and Rogers give quality performances and are an asset to this film. Rogers especially gives a tough performance of a woman who has dealt with a lot since the world's fall. Props also go out to actor Dohn Norwood (Hell on Wheels) who plays the compass in Ben. His performance is strong and too short.  O'Donoghue and Antariska fit what they were casted for. They are the spectrum of the next generation who will rebuild the world. The problem I have compared to most of the other cast, is their look with costume and makeup design. Both look a bit out of place, to clean cut for what has happened and surviving in the forest with less then the bare necessities. With that being said, the weathered look of the costumes and the exteriors fits a formulaic post-apocalyptic film

The film offers some minimal action sequences, makeup FX, and utilizes the location of the woods very well. The cinematography is very good for this film with a balance to presentation of each character. The DP Matt Edwards lights the film very naturally using the shadows as an effective tool never making it too hard to focus. The sound as whole works well with the score being not an after thought, but something that again is used minimal but effective. The placement of the score fits where it goes like peg in the right shaped hole. Watching What Still Remains,  and seeing the previous short form films that Mendoza has directed, his debut is safe and formulaic. It is a film the uses the woods well and tells a conflict of young woman who is coming of age. Mendoza definitely offers a variety of conflicts and themes during this narrative. Creating a solid foundation, the story focuses on religion, freedom, revenge, community, death, marriage, power, and survival throughout. The film also has a couple of twists which you may see coming but are set up well and add to the film. A couple of interesting aspects, focuses on the subjective perspective for the post apocalyptic world and whether or not the new world order is right or madness? Films like The Endless, The Village, Population 436, and The Survivalist as well as The Walking Dead all have created this subjective storytelling with a great amount of success and challenge for the viewer. Also, the idea of the "human monster" is found in different characters. It gives a gray area during the film to who the protagonist is and who the antagonist is? Check out the trailer for What Still Remains.