I Don't Feel at Home – Review

I Don't Feel at Home – Review 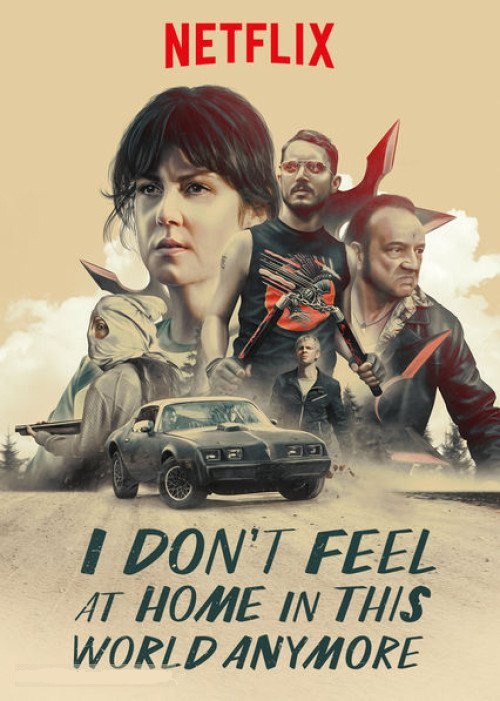 I Don't Feel at Home in This World Anymore – Review

Now available on Netflix, is the directing debut of a genre acting fave of this reviewers – Macon Blair. Macon, for those unfamiliar, is the star of such films as Murder Party, and Blue Ruin – a Jeremy Saulnier staple (also appearing in Green Room). While I Don't Feel at Home in This World Anymore isn't horror (it's labeled a Comedy/Crime/Drama), based on the amazing resume of Mr. Blair, it seemed natural to review the film – so as to shine a spotlight on it for those of interest.

I Don't Feel at Home in This World Anymore is a somber little film, starring Melanie Lynskey (Heavenly Creatures) as Ruth. A woman who is just ... tired of this world. Her job sucks. She has no stable relationships in the world. Her house is broken into and the cops don't seem interested in helping her. She's fed up with the world. One of her neighbors even allows his dog to shit in her yard ... this leads her to a meltdown on said neighbor, played by a unhinged Elijah Wood. Deciding to do something about the break-in she suffers, and somehow gaining trustful aid by Elijah's "Tony," Ruth sets out to find her stolen property and seek some sort of righteous karmatic justice. Some things go well (she recovers some of her stolen items) ... and some things go awfully wrong (broken finger, anybody?) ... but once things go to far, Ruth and Tony are too far deep down the rabbit hole to recover – and they're dragged into a crazy spin of break-ins, gun-fighting, and a nasty incident involving a poisonous snake ... well ... less said, the better.

I Don't Feel at Home in This World Anymore starts slow and builds to an energetic finale. Kinda in the same way Jeremy Saulnier films do. Just when you think the film's about to take a right – it darts left. And you enjoy the ride the entire time. The film was released onto Netflix as an exclusive back in February, but sadly, I admit I have only just recently discovered the film's existence. It really brings up the argument as to whether Netflix "originals" can hold their own against the rest of the pack ... or maybe I am still just so use to the way films use to be released. Promoted theatrical. More recently, VOD ... Then home video ... pay cable ... then regular cable. And eventually network (maybe) .... getting use to Netflix and ... that's it? It may take this old dog a few more years (I am still convinced Netflix's *HUSH* is one of the most overlooked gems of this decade. And I can't even buy it!!!!!) .... At any rate. Hopefully this review helped you discover this film. If you already knew of its existence and watched it? You're understanding of the Netflix system is maybe a bit better than my current grasp! But I'm learning ...