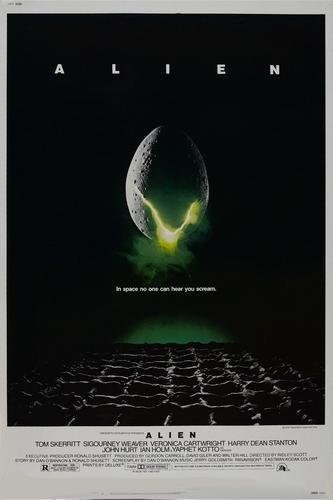 Calling all Alien fans!  With the 40th Anniversary of the epic horror and sci-fi legend coming up Fox and Tongal are partnering together to give fans and filmmakers a chance to create their own entry into the world of Alien.  Are you a fan filmmaker?  Ever wanted to take on a Xenomorph?  Here's your chance to show the world how you'd handle the terror of space.  Check out the details below!

“In Space, No One Can Hear You Scream” –

Fans to Develop Shorts Set in the Alien Universe

Twentieth Century Fox today announced it is joining forces with Tongal, an online creator network, to launch a campaign celebrating the legacy of the Alien franchise – but this time, fans will be driving the spaceship. In honor of Alien’s 40th anniversary, Twentieth Century Fox is seeking visionary super fan filmmakers to produce shorts set after the events of the original movie.

The “by the fans, for the fans” campaign asks filmmakers to create wholly original stories that draw on the elements that makes Alien uniquely Alien — from slow atmospheric buildups to badass female protagonists to “space truckers.” As part of the campaign, six fans will have the opportunity to work under FOX mentorship to craft their shorts.

“Alien has influenced an entire generation of sci-fi and horror filmmakers with its definitive style and ‘edge-of-your-seat’ storyline. Now, we’re giving fans the chance to put their own stamp on it,” said Beth Goss, Chief Brand Officer, Twentieth Century Fox Film. “Through this partnership with Tongal, we’re thrilled to give this next generation of filmmakers the opportunity to continue the Alien story with whatever chest-bursts and facehugs they see fit.”

Starting today, fans can submit their pitches by visiting Tongal.com/Alien. From this initial pool of pitches, eighteen filmmakers will be chosen to further develop their pitch with a visual treatment, pitch video and scripts. Then, six filmmakers will be selected by Twentieth Century FOX to bring their short to life.

“We’re thrilled to be working with Twentieth Century Fox on the anniversary of such an epic franchise and bringing that opportunity to our creator community,” said James DeJulio, Co-Founder and Chief Creative Officer, Tongal.  The Tongal and Fox collaboration is a bullseye for us as we continue our work to empower creators to engage current and future fans around titles like Alien.”

Fans can learn more about the campaign by visiting Tongal.com/Alien