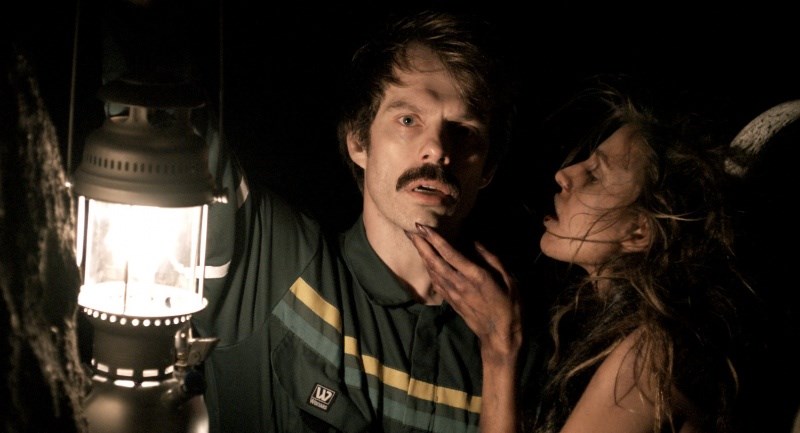 Available on DVD right now via Amazon and Epic-Pictures.com, Vidar the Vampire is a smart and masterful collaboration of vampire lore and lifestyle that is executed so well on a black comedy platform. With vampire trouped entries that blend horror and humor over the last four decades including Once Bitten, Buffy the Vampire Slayer, What We Do in the Shadows, The Fearless Vampire Killers among others, we see new entries arise from the coffin each decade. From Norway, Vidar was a darling on the film festival circuit in 2017 and now released by Epic Pictures. Handling not only the lead character “Vidar” but also the behind the scenes with casting, composing, co-producing, writing and directing, the all-around talent of Thomas Aske Berg creates a bizarre profile of a vampire dealing with the afterlife.

This film focuses on man who has lost his place in life. Vidar, who is a Christian farmer who wants more from his life and is wasting it with his mother. Wishing for something more and dealing with past pains of never having a girlfriend, Vidar allows sin to seep into his soul and dreams. Thinking it is a dream, he is confronted by what looks like Jesus but may be the lord of darkness and an ageless vampire. Accepting Vampire Christ’s body and blood (the most off-guard and risqué communion ever) Vidar becomes a blood-sucking creature of the night. Rising from his coffin, he is having trouble adapting as we learn his life’s story during a therapy session that ties the film together. Going back to the beginning, we are voyeurs to Vidar’s awkward and painful existence. As we learn more about Vidar, we connect with his struggles, changes and learning curve. Tumbling through his afterlife of sex, partying, feeding and adjusting, (cheered on by Vampire Jesus) Vidar comes to a self-realization that things don’t really change especially when you got forever.

Vidar the Vampire continues the traditional of exploitative, vampire black comedies with a balance of over the top and true to life. Always being self-aware and paying respect to the vampire sub-genre, we are immersed in every level of this film and want to go on the ride with this lead character. Using the troupes of the vampire sub-genre secondary instead of the foundation for the narrative, we see a very flawed character in Vidar take on his role as the Charlie Brown of vampires. A bit shocking at times, sexy at others but with a share of blood-drenched sequences throughout, Vidar the Vampire is self-reflective and laced with a fluid set of ideals about sexuality, relationships, psychotherapy, religion and finding yourself, the film never falls on track and stays sharp with the reality of being the undead brought out of the shadows.

Watch the trailer for Vidar the Vampire right here and being entranced by Vidar on VOD and DVD.