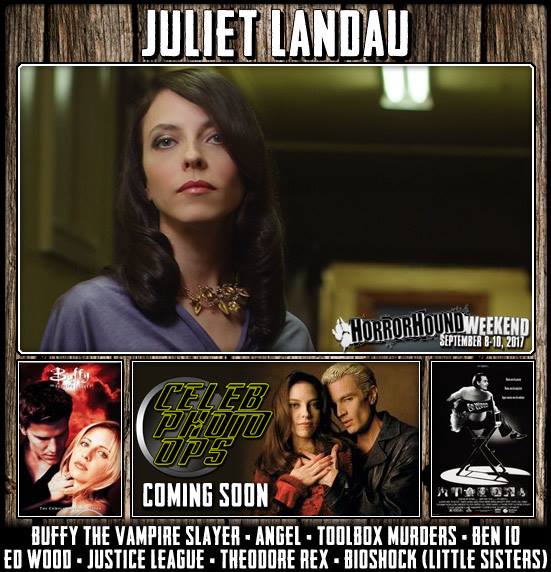 We are thrilled to reveal the next guest scheduled to appear at HorrorHound Weekend: Indianapolis – September 8-10th – at the Marriott Conference Center @ Indy Marriott East ... JULIET LANDAU!

Juliet Landau (actress, director, producer) co-starred in Tim Burton’s Ed Wood, and starred opposite Whoopi Goldberg in Theodore Rex. She created the role of Drusilla on Buffy The Vampire Slayer, appearing on Buffy the Vampire Slayer and Angel over the course of six seasons.

Juliet directed the documentary Take Flight about, and for, Gary Oldman, and co-directed Dream Out Loud, which features interviews with Guillermo del Toro, Joseph Gordon-Levitt and Rian Johnson. She is currently immersed in co-directing two feature length documentaries about the vampire phenomenon. A Place Among the Dead covers crime, reality: when people take the fantasy of vampirism too far. A Place Among the Undead covers every aspect of vampires in myth and pop culture: movies, TV, art, literature, comics, music, video games and young adult literature.

Ms. Landau has starred in over 20 films. She is currently starring in Where The Road Runs Out on Netflix. She has guest starred repeatedly on television and done extensive voiceover work in features, television and video games. Her voiceover work includes Justice League(Features and TV series), Green Lantern (Feature and TV series), Thundercats, Ben10: Omniverse, Ben 10: Ultimate Alien, Bioshock 1 & 2, and Star Wars: The Old Republic. She has garnered outstanding reviews and awards for her work in the theater every time out. Some of her favorite leading roles include Roberta in Danny and The Deep Blue Sea, Blanche in A Streetcar Named Desire and Hennie in Awake and Sing!

Landau co-wrote two issues of the Angel comic book for IDW. She and her husband, Deverill Weekes are now penning the companion coffee table book to A Place Among the Undead called Book of the Undead. This will be Juliet's first-ever HorrorHound Weekend appearance – where she will be appearing alongside her Buffy/Angel co-star, the already-announced James Marsters.

Tickets for HorrorHound Weekend are NOW AVAILABLE at early bird discount pricing. Look for prices to increase this Summer. But before that happens – save some cash – visit www.horrorhoundweekend.com and secure your passes today! Share - and tell your friends!