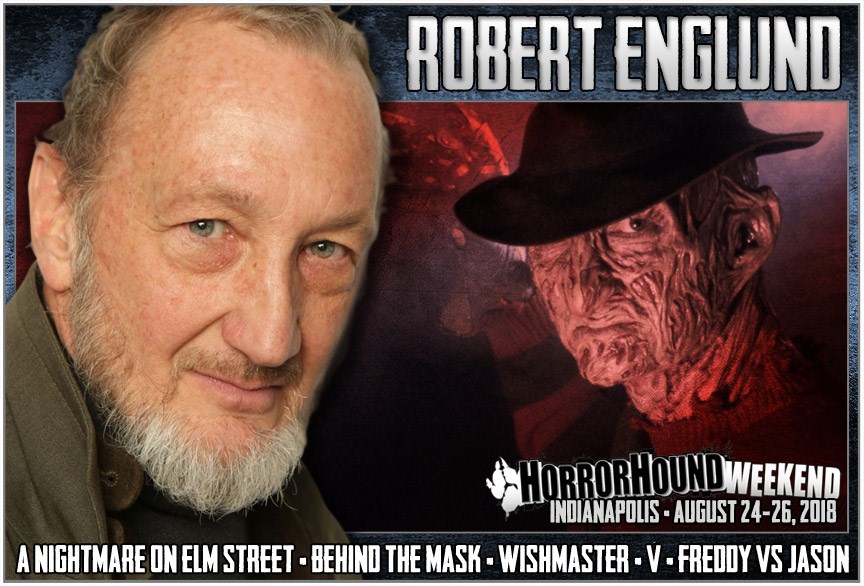 HorrorHound Weekend: Indianapolis returns this AUGUST 24-26th – and the show is moving to an all-new location – in the heart of downtown Indianapolis at the beautiful JW Marriott Indianapolis, where we will be taking over an astounding 90,000 square feet of ballroom space, including the largest-ever Mask-Fest event to date! As part of this big move, we have some big announcements in store .... the most important being that ticket pre-sale launches this Monday - April 16th!

As part of Monday's pre-sale launch, we will be offering a special 24-hour sale, where you can pre-order Weekend Passes, Weekend Early Entry, and VIP for a discounted price ... the lowest possible price at that! (Seriously ... in this industry ... Monday's sale is crazy low!) So be on the lookout for that! Until then, we will be populating www.horrorhoundweekend.com with all new information, including hotel information, vendor information, and more! It will be a non-stop parade of updates. But the updates we know everyone is waiting for are guest reveals! Yesterday we revealed a first-time HHW attendee in Peter Weller (RoboCop) ... today we announce a returning guest – and one of the biggest icons in the history of the modern horror genre ... ROBERT ENGLUND!

We are thrilled to reveal that Robert Englund will be making his much-anticipated return to HHW ... fitting that it be as part of our big new move to the JW Marriott in Downtown Indianapolis! Robert Englund, of course, portrayed "Freddy Krueger" in all eight original A Nightmare on Elm Street feature film – as well as the various sequels (including Dream Warriors, Dream Master, Freddy's Dead, Wes Craven's New Nightmare, and Freddy vs. Jason) ... but this horror icon having appeared in such features as Wishmaster, Hatchet, Behind the Mask: The Rise of Leslie Vernon, Urban Legend, Strangeland ... plus The Mangler, Eaten Alive, Dead & Buried, Galaxy of Terror, Thou Shalt Not Kill, 2001 Maniacs, Dance of the Dead (Masters of Horror), The Phantom of the Opera (1989), Zombie Strippers, Jack Brooks: Monster Slayer, Red, C.H.U.D. II, Fear Clinic, Killer Tongue, Lake Placid vs. Anaconda, Strippers vs. Werewolves, The Funhouse Massacre ... plus appearing in episodes of V (as "Willie"), Charmed, Fear Clinic, Babylon 5, Supernatural, Nightmare Cafe ... and (of course) Freddy's Nightmares. Robert has even dabbled in voice acting – playing the "Dire Beaver" and "Dread Beaver" in Teenage Mutant Ninja Turtles, "Felix Faust" in Justice League, "Anti-Pops" in Regular Show, and "Scarecrow" in Injustice 2 (video game).

The web site for HHW Indy is now online – please visit www.horrorhoundweekend.com today – and don't forget that MONDAY – April 16th will be the official ticket launch date for this big show! We will host special one-day pricing starting around noon EST! Don't miss out!