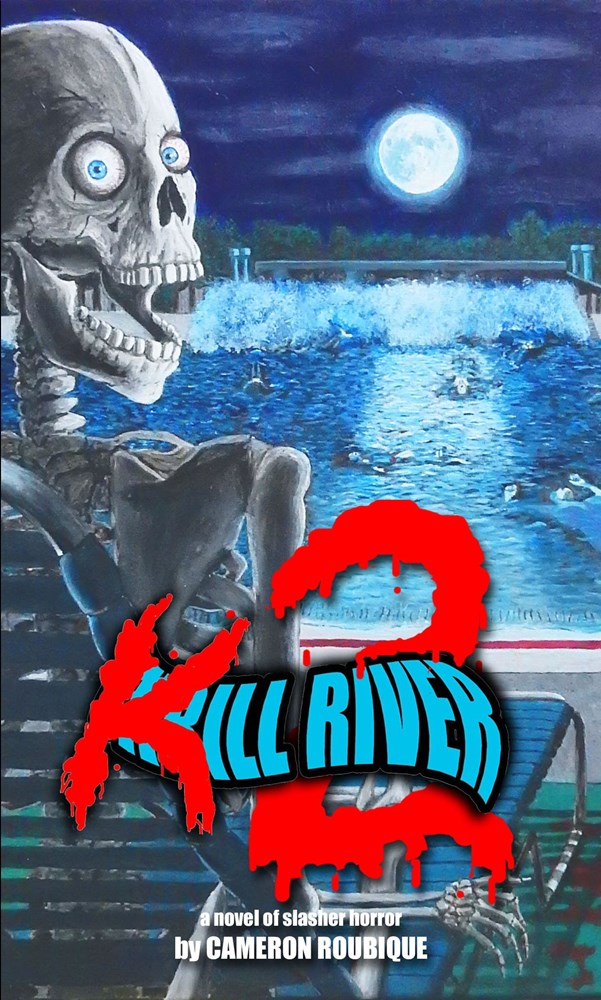 Cameron Roubique is at it again, writing slasher stories to the
back beat of 1980’s Punk and New Wave.
This time he’s taking us back to the park with new rides, new thrills,
and new kills.  Kill River 2
showcases our friend Cyndi, a year after her run in with a masked maniac at an
abandoned amusement park.  Now she has a
boyfriend, a new set of friends, and a part-time job.  However, she also has nightmares about last
year’s debacle, and a sinking feeling that “somebody’s watching me.”

This gory, blood-soaked water park sequel, doesn’t
disappoint in its display of old school horror.
While it’s a quick read, don’t mistake it for elementary, Roubique’s
story has as many twists and turns as an epic water park slide.  Maybe it’s the viscera that made that slide
so slick.

If you are ready to go back to ghetto blasters, and cassette
tapes, to a time when horror had to find you in real-life, rather than haunt
you online, then you are ready for Cameron’s old school slasher stories.

Just like his previous books, Kill River and Disco
Deathtrap, Kill River 2 is completely created by Roubique – he
prints and binds the books, and he created the cover art.  Old school and punk rock – gotta love that
DIY attitude.

Roubique’s story sports a thick description to bring the
reader into the situation, to run alongside the heroine, as our survivor girl
evades capture and a gruesome fate.

Unfortunately, not everyone is as lucky as Cyndi, there are some
epic slasher kills.  Bailing hooks, rope,
big ol’ knives, water slide bob-sleds, gate hinges, and wading pool
undercurrents are just some of the ways the masked maniac is slaughtering
teenagers left and right.

Cameron uses everything in the water park as a potential
death trap, serving up gore and violence, with an awesome soundtrack.

When you get to the end… well… I won’t ruin it for you.  Let’s just say I promptly emailed Cameron to
find out when we can get the next installment of our pal Cyndi’s story.  He assured me it would be out as soon as
possible.  Maybe if we all bought enough
books he could get to it sooner, and not spend so much time at that full-time
job. Psshhaa! Job-smob!  Let’s hope so,
otherwise Cameron may have more to worry about than Cyndi’s foe.  Just kidding, Cam, you know we at Horrorhound
love you… now, get to typing.

Cameron is working on a new stand-alone book – it’s a 1981
story with a brand-new slasher! How exciting.

Cameron’s books can be found at www.killriver.com and on
Amazon.  There’s a Kindle edition of Kill
River 1 coming out May 25, 2018 for horror fans who prefer digital formatting.  Pre-order is available now.