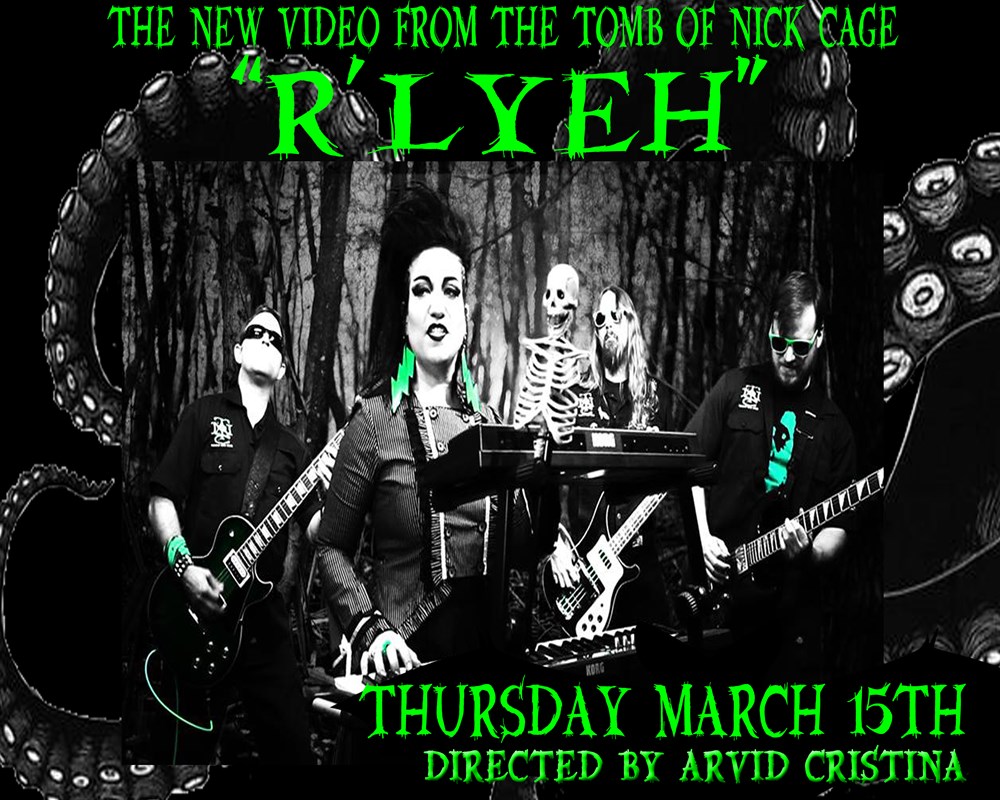 New Orleans-based band The Tomb of Nick Cage have been one of the most engaging and eclectic bands in the horror-punk genre today, and their vision is now continuing on to your screen with the new video for the track "R'lyeh" from their debut full-length The Pharoah Of New Orleans. If you aren't familiar with the band or their melding of horror-punk and death-punk, perhaps this first taste is just what the doctor ordered!

Speaking about how the song originally came together as the final track on The Pharoah Of New Orleans, front woman Kym Trailz says, "Sean, Aaron and I were transitioning in new band members at the time we conceptualized this song. We are very influenced by new wave and postpunk, but it is generally filtered through a punk and metal lens. This was an opportunity to try our hand collaboratively at dance music with a gothic flair. When Taylor added his guitar leads, it sent it over the top and gave it that signature Tomb of Nick Cage vibe. With Taylor and Edward on board, it's really opened up the possibilities of what we can accomplish, and I can't wait for everyone to hear what we are working on next!"

With the new band members in place and The Pharoah Of New Orleans having been available for some time, the band decided that they wanted to create a video for the track, with a release scheduled on the 81st anniversary of Lovecraft's death. Turning to Arvid Cristina of Psych-O-Scope Studios, the band realized they had found the perfect collaborator. As Trailz says, "Arvid is a long time friend in both fandom and the music scenes of New Orleans and we've been wanting to collaborate for a long time. Our mutual love of the Cthulhu Mythos was the perfect opportunity to finally put our visions together. He's very talented and I was honored to work with him!"

With regards to the actual production of the video, Trailz continued "Being on time and budget constraints didn't stop Arvid from putting out an amazing video we can't wait to share with the world. Arvid told me 'I enjoyed working on it, when money and time are not on your side, you have to get creative.'"

The result is the brand new video for "R'lyeh" which you can now view below!

For more information on The Tomb Of Nick Cage, be sure to visit their Official Website and give the band a Like over on their Facebook page. And if you'd like to dig a little bit more into the band, check out all of the coverage regarding the band over at The Deadhouse!