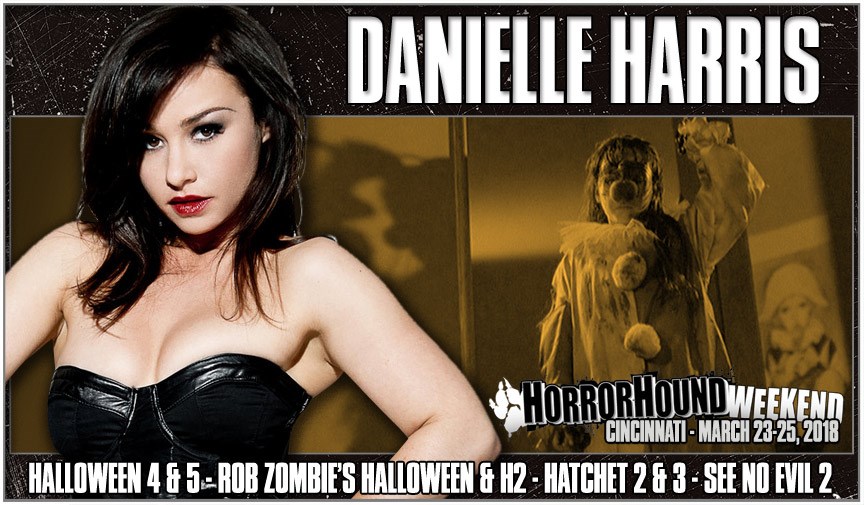 We are happy to announce that DANIELLE HARRIS will be joining us later this month at HorrorHound Weekend: Cincinnati.

It was pointed out to us that Danielle Harris has not attended a HorrorHound Weekend event in Cincinnati since 2010(!!??) ... Danielle is a fan fave and horror icon – so we had the opportunity to remedy this oversight!

Danielle Harris kickstarted her horror career playing Young "Jamie Lloyd" in Halloween 4: The Return of Michael Myers and Halloween 5. Soon after, she appeared in a number of genre and non-genre films, such as Don't Tell Mom the Babysitter's Dead, Free Willy, Marked for Death, City Slickers, The Last Boyscout, and the TV series Roseanne. In 1998 Danielle jumped back into the world of horror with both feet, appearing in the teen slasher Urban Legend. She later starred in such horror films as Hatchet II (and Hatchet III), Stake Land, Chromeskull: Laid to Rest 2, See No Evil 2, Holliston (TV), Hallow's Eve, Camp Dread, The Town That Dreaded Sundown, NOTLD: Darkest Dawn, Havenhurst, Left for Dead, Cyrus, Blood Night, The Black Waters of Echo's Pond, and the TV series Fear Clinic. Danielle also appeared as "Annie Brackett" in the Rob Zombie reboot of Halloween (and Halloween II). Additional movies and TV roles you may have seen (or heard) Danielle in include Poor White Trash, Killer Bud, and as the voice of "Debbie Thornberry" in The Wild Thornberrys television series and films/crossovers.

*Early Entry, VIP, and Platinum Passes are now SOLD OUT! Saturday Passes are in limited stock - as are Friday Night's Henry Rollins stage event. To secure remaining tickets while they are still available CLICK HERE - and tell your fiends!