Slither Makes Its Way to Blu-ray!

Slither Makes Its Way to Blu-ray! 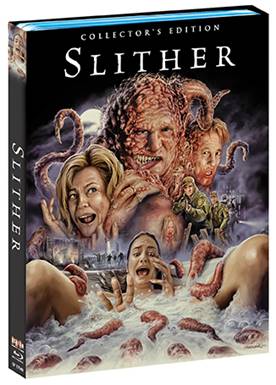 From James Gunn, co-writer and director of Guardians of the Galaxy, comes Slither, the deliciously demented story of an unnamed evil wreaking havoc on a small town.

Making its Blu-ray debut as a deluxe Collector’s Edition Blu-ray on  August 1st, 2017 from Scream Factory, this delightfully disgusting creature feature comes jam-packed with bonus features, including a new audio commentary with director James Gunn, actor Nathan Fillion and actor Michael Rooker, a new interview “The Genesis of Slither” with writer and director James Gunn, a new interview with actor Gregg Henry, audio commentary with James Gunn and Nathan Fillion, deleted and extended scenes with optional commentary by James Gunn, Slithery Set Tour with actor Nathan Fillion, and much, much more! Fans can pre-order their copies now by visiting ShoutFactory.com

About Slither: The sleepy town of Wheelsy could be any small town in America  – somewhat quaint and gentle, peopled with friendly folks who mind their own business. But just beneath the surface charm, something unnamed and evil has arrived ... and is growing. Intent on devouring all life on Earth, this dark and slimy entity is infecting anyone in its path. Now it's up to the local sheriff, Bill Pardy (Nathan Fillion, Firefly, Castle), and his team to stop the spread of rampant devastation – and shocking mutilation – before it's too late. This outrageously funny horror film also stars Michael Rooker (Guardians of the Galaxy, The Walking Dead), Elizabeth Banks (The Hunger Games, Pitch Perfect) and Gregg Henry (Body Double, Jason Bourne).

• NEW The Other MacReady – an interview with actor Gregg Henry

• Deleted and extended scenes with optional commentary by James Gunn

• The Sick Minds and Slimy Days of Slither

• Brewing the Blood – How to Make Blood

• Who is Bill Pardy? featurette