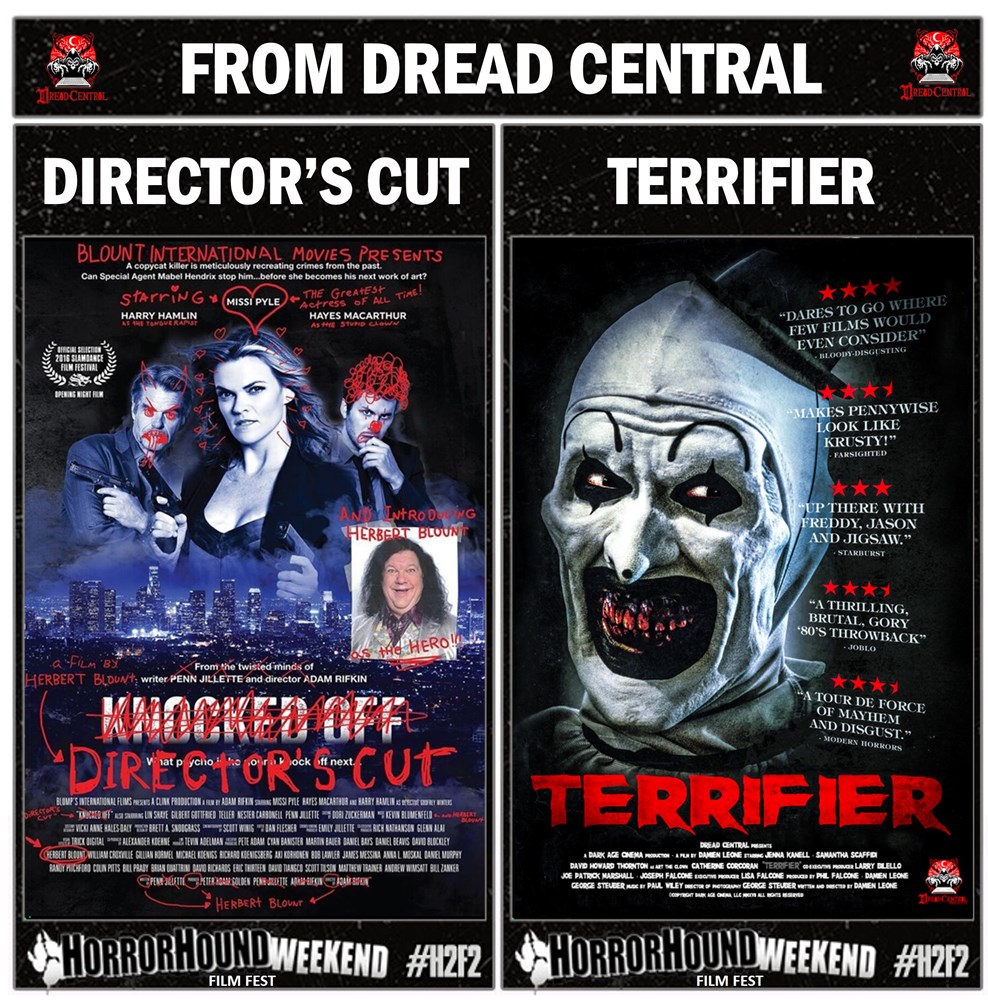 The HorrorHound Film Fest (#h2f2) is excited to announce the screening up two upcoming releases from Dread Central (part of Epic Pictures Group).  In recent years, Dread Central & Epic have been turning some heads with their horror releases; including Tales of Halloween, VHS Viral, The Monster Project, and the HorrorHound-favorite Old 37.  Dread Central has graciously offered our fans a sneak-peek of two higly anticipated titles DIRECTOR'S CUT and TERRIFIER.  Be sure to check out these, and many other, amazing films at the HorrorHound Film Fest, as part of HorrorHound Weekend, March 23-25, 2018 in Cincinnati, Ohio.

Directed by Adam Rifkin, DIRECTOR'S CUT is a crowdfunded movie, about a crowdfunded
movie,
Knocked Off, and one man's mission to "fix" what
he feels the production crew got wrong. Though firmly in cheek, it takes
several jabs at crowdfunded projects. The poor acting of contributors who paid
for a part in the film. The stress of dealing with contributors that expect
perks or who paid for the right to be on set. The outright creepiness of
contributors paying to spend time with their favorite actors. All of these come
together to show how difficult it is to appease the masses when they are paying
for your film.

Herbert Blount (Penn Jillette) is our
narrator and director for this cut. He is a soft spoken, delusional and
obsessed fan of the leading lady Missi Pyle (herself). Herbert re-cut Knocked Off, adding in deleted scenes, behind the scenes material
and footage that he shot himself. His footage is understandably and
deliberately amateurish. Blount's commentary highlights common mistakes in
continuity, and film terminology. He is very opinionated about the actors in
the film. DIRECTOR'S CUT also includes a haunting scene featuring Teller ... talking!

TERRIFIER has the look and feel of an 80s-slasher flick.  The grainy, low-res looking cinematography
works so well.  It even
serves to make the special effects look more realistic.  Just when you thought you have seen
it all, Art the clown does something with a hacksaw that you cannot imagine. If you like creepy clowns, hell if you hate creepy clowns,
this film deserves a watch.  It is well
made, it has a good story, gallons of blood, great special effects, and just a
great time. Art makes Pennywise look like a Fraggle! (With all due respect.)