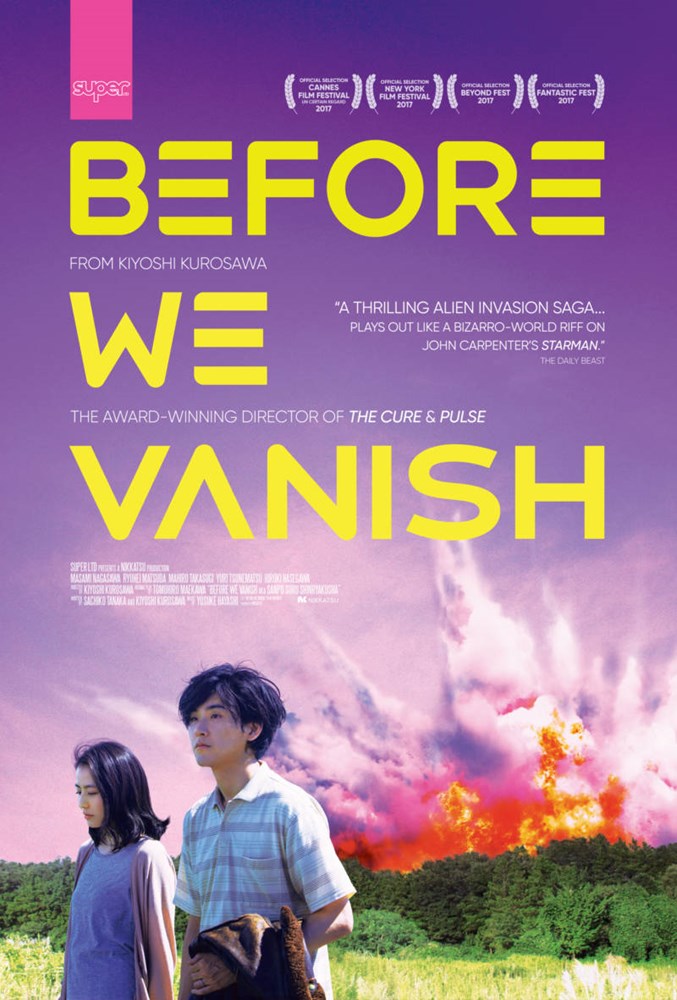 What’s in a name? What makes us unique to not only
each other but the world at large or the universe? Do our conceptions make us a
source of knowledge more powerful than a computer or life outside of Earth? For
famed Japanese genre writer, director and storyteller Kiyoshi Kurosawa, it
does.
Before We Vanish is a layered
and methodical journey into the human heart of an alien invasion.

Before
We Vanish begins with a signature Asian-style bloodbath. A young,
cookie cutter Japanese schoolgirl named Akira has returned home. As we watch
the surroundings of this typical neighborhood, we see an older woman pulled
back into a serene home where all who lived there but Akira are savagely
murdered. We watch the Police do their investigation while a reporter named
Sakurai attempts to snag details on this heinous story. Roaming around the
house, he is met by a teen boy named Amano. Amano explains that he is looking
for a “guide” during his assignment on Earth. While this is going on, a couple
named Narumi and Shinji are at a painful crossroads in their marriage as they
have grown apart. Narumi is called to pick him up after he was found wondering.
Shinji has suddenly become a shell of himself, almost blank. Shinji tells Narumi
that he is not the person she knew and that he has been taken over by an alien
intelligence to gather information or conceptions from humans. As the trio of Shinji,
Akira and Amano go about their assignments, we learn that an alien invasion has
begun on earth without anyone knowing it has started. Though separated, all
three aliens are collecting data or conceptions from human minds to build
structure, understanding and intelligence of this race to report back to their
home planet. 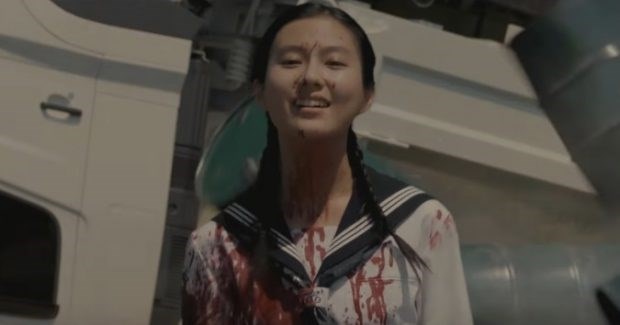 As the three of them use their “guides” (Narumi and
Sakurai) to come together and creator a communicator, the “guides” question
whether the three are all ill, mentally damaged or perhaps telling the truth.
With each hour that goes by, these three beings are taking conceptions from
human minds and in the process, relieving them of what has burdened and caged
them. For some, it is a release for others it is the beginning of the end for
them. Will Narumi and Sakurai, follow their orders and bring down Earth through
the three vessels or will they find humanity in the ones they love, trust and
befriend?

Before
We Vanish is bare bones, human drama trying to be science
fiction thriller. Watching this film first at Fantastic Fest last year then at home, I was underwhelmed by the
effort that a filmmaker like Kurosawa had built a reputation on. Drawn out by at
least ten to fifteen minutes, Before We
Vanish suffers from what could have been if Kurosawa had made up his mind on
the tone of the film and perhaps hired a different editor. Coming in at a methodical
two hours and ten minutes, the first act of the film offers a bright light
blending pulses of straight up horror, the intrigue of invasion storytelling
and the thrilling idea of three aliens connecting for more than destructive
purposes. For me, it fell flat with the second act. Kurosawa suffers from the
same condition many filmmakers usually go through with a long film. During the
edit, the filmmaker sits back and justifies the idea that their project needs
very little excluded. We saw this with Gore Verbinski’s A Cure For Wellness (2017). Unlike Kurosawa’s darker films such as Pulse (2001), Doppelganger (2003), or Creepy (2016), Kurosawa just leaves too
much excess on the overall narrative, letting some scenes repeat when they
should have been cut. This is especially true in the second act which could be
paired back some. One scene in Before We
Vanish, focuses on Akira, Sakurai and the police. Why the fight choreographing
is different, Akira again beats down an authority figure. This repeat of the excess
violence shows me nothing more than the same sequence we have seen earlier in a
different location. It does not build the story, the tension or a reason why I
care about these characters. If I wanted that kind of uber-violence, I would
watch Battle Royale (2000). 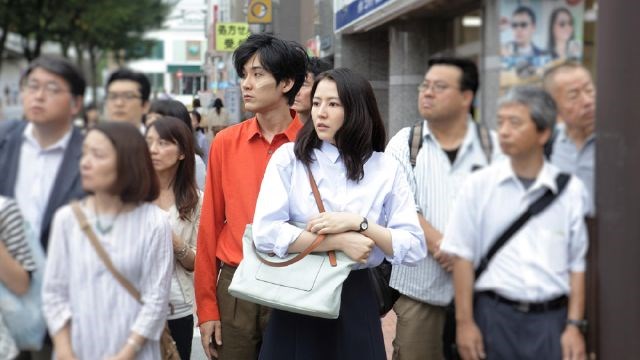 Instead of building intrigue with the Akira and her
reckless aggression and horror, we see her just become a paper character like
the Terminator but with no substance. Instead Amano taking the lead, we see Kurosawa
push a relationship with his “guide” Sakurai. For me, you don’t care really for
these characters. In Train to Busan (2016),
the film repeats the same struggle, conflict and result. However, you come to
connect and care for this group of characters during the run time. The only
smart sub-plotline is the marriage aspect with Narumi and the husband/alien
host Shinji. Their relationship has depth and a reality to it. It connected on
several levels with me as viewer in regard to rediscovery, a broken relationship
and the terrifying idea of losing your memories or conceptions. That idea of
losing parts of you was more frightening then the overall film idea of an invasion.
It harkened back to the effectiveness of the Invasion of the Body Snatchers lore and style of horror.

One of the most intriguing aspects of Before We Vanish, revolves around the conflict
and question of “What would you do, if you could stop this invasion but understood
your enemies thinking and decided they were right?” Great characters,
especially antagonists are guided by this question. The Saw franchise (2004-2017), Apt
Pupil (1998) ... hell, any cult style film. This conflict challenges us to not
necessary like the character but to understand him. We see this with the “guides”
throughout the narrative. Beyond the philosophical challenges, the
cinematography is quite good as we see the DP give respect and space for the
scenes to develop. Scenes like Shinji taking Narumi sister’s conception of
family or the chaos of the hospital scene or the opening bloodbath shows the communication
of Kurosawa and his DP allowing the scene to flourish in Before We Vanish. The sound design and score are excellent and raise
this film. The influence of Composer Danny Elfman is felt and adds to the film’s
1980’s style and feel. This versatile score is weaved throughout and makes you
think of classic sci-fi and fantasy features by Tim Burton, Joe Dante and Robert
Zemeckis.

In all, Before
We Vanish can be a challenge to push through. It has its moments of levity
with the cast bringing a bit of light to a usual dark topic found in science
fiction. The variety of human conflicts challenges the viewer which for films steping
into this sub-genre are well needed. It offers the viewer a lot to chew on and
shows Kurosawa as the storyteller we have come to know. In my opinion, this is
not his best to date but it does bring out the human spirit in what makes us
unique. Like A Cure For Wellness, Before
We Vanish is a passion project for Kurosawa as it blends genre troupes of
horror, science fiction and the melodrama against the canvas of quality filmmaking.
Check out Before We Vanish in select
cinemas right now through Super LTD. 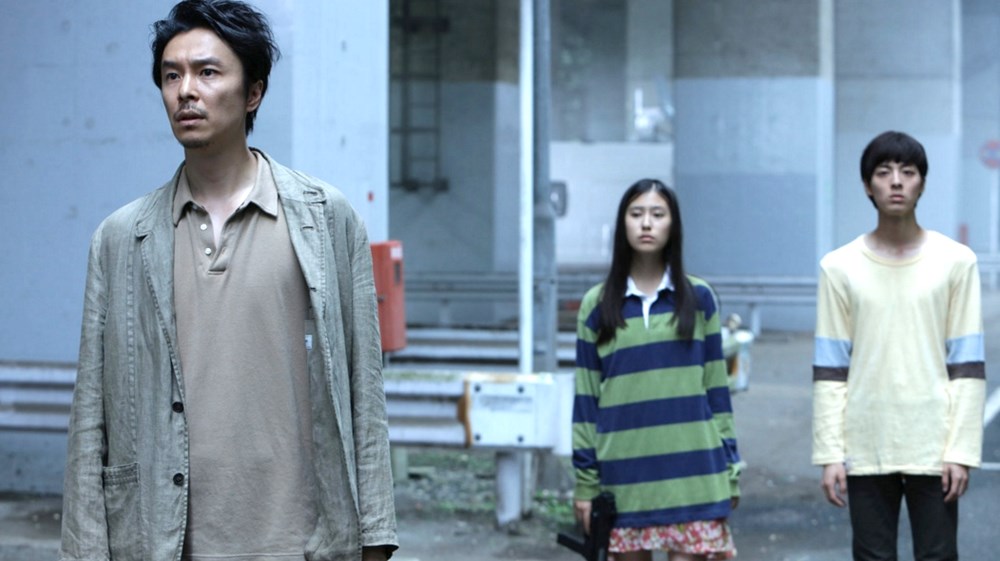