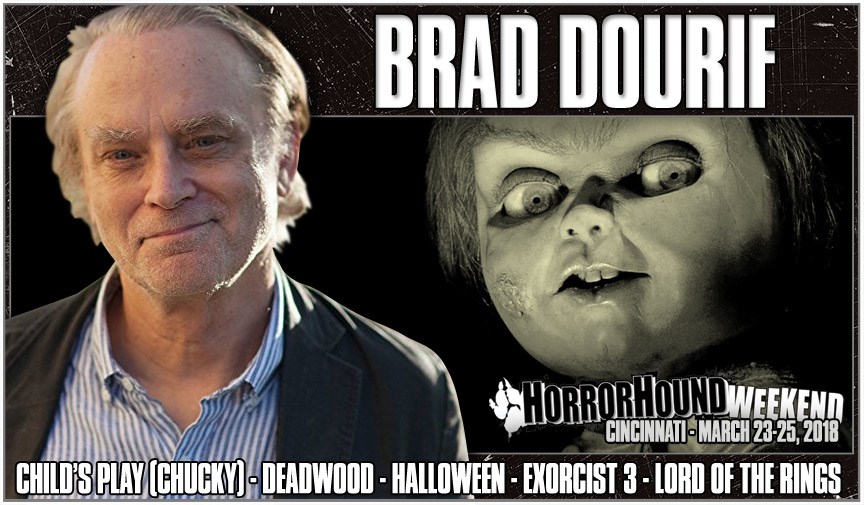 We are in the midst of a guest announcement spree in support of both the holidays, and as a reminder that early bird discount pricing ends on January 1st! HorrorHound Weekend tickets make for great presents – and our next event is March 23-25th in Cincinnati, Ohio. So ... how on Earth could HHW get any better? How about with the addition of BRAD DOURIF to the guest list!?

A horror icon – Brad Dourif has portrayed the psycho "Charles Lee Ray" ... or "Chucky," if you will, in the Child's Play franchise since its inception in 1988. Through sequels like Child's Play 2 and 3, Bride of Chucky, Seed of Chucky, Curse and the most recent Cult of Chucky films. Brad's horror cred doesn't end there, however, as he has appeared in such films as Rob Zombie's Halloween (and Halloween II), The Exorcist III, Alien: Resurrection, Nightwatch, Dario Argento's Trauma, Stephen King's Graveyard Shift, Urban Legend, Body Parts, Tobe Hooper's Spontaneous Combustion, Pulse, Priest, Brian Yuzna's Progeny, Grim Prairie Tales, Critters 3, The Wizard of Gore (2007), Death Machine, Vlad, and The Prophecy 3: The Ascent.

Brad Dourif kicked off his career in 1975 with his Oscar-nominated (and Golden Globe winning) role in One Flew Over the Cuckoo's Nest. He went on to appear in such films as The Lord of the Rings, Dune, Blue Velvet, Heaven's Gate, Mississippi Burning, Murder in the First, Jungle Fever, Color of Night, Amos & Andrew, Drop Dead Sexy, Eyes of Laura Mars, Ragtime, Sonny Boy, Bad Lieutenant: Port of Call New Orleans, and Fatal Beauty. He has even popped up in such TV series as Once Upon a Time, X-Files, Tales from the Crypt, Star Trek: Voyager, Millennium, and Babylon 5.

You can order your tickets for HorrorHound Weekend today by visiting www.horrorhoundweekend.com - remember, tickets are emailed – if you wish to pick up some last minute gift ideas for the holidays. Thank you!