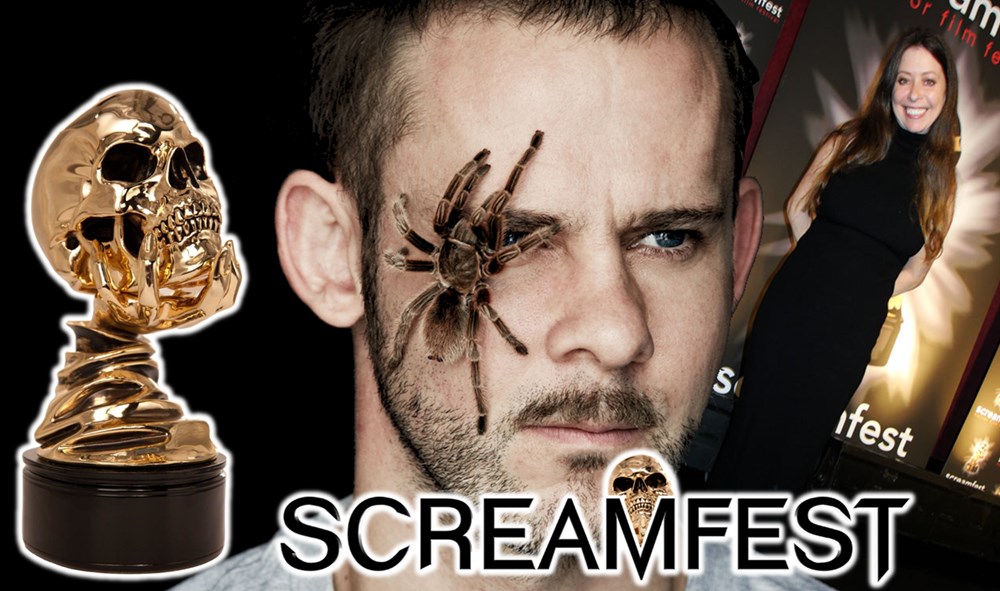 The largest and longest running horror film festival, Screamfest, kicks off October 10 at the TCL Chinese 6 Theatres in Hollywood, California.  Founded in 2001 by film producers Rachel Belofsky and Ross Martin, Screamfest strives to showcase filmmakers and writers in the horror and sci-fi genres.  Many significant horror titles from the past 16 years were first seen at Screamfest.  For 2017, filling the position of Screamfest Ambassador this year is Dominic Monaghan (Lord of the Rings trilogy, Lost, X-Men Origins: Wolverine).

“I am extremely honored to serve as this year’s Screamfest ambassador,” said Monaghan. “I applaud Screamfest and its Founder and Festival Director Rachel Belofsky for embracing the work of filmmakers and actors in the horror genre. I’m a big fan of this space, and I couldn’t be more thrilled to be a part of a fest that truly acknowledges unique and creative work.”

HorrorHound: How has Screamfest set itself apart from the vast sea of horror film festivals across the US?

Rachel Belofsky: We strive to assemble the most influential titles in indie horror and sci-fi. We also program an event that provides guests with an amazing experience and attending filmmakers with significant exposure and support.

HH: Horror has become more mainstream than ever.  Every media outlet has its own horror programming.  Do you feel the success of Screamfest is due to this popular swell of horror-philes ... or, do you feel Screamfest (and other horror film fests) have been partially responsible for establishing horror in the "norm"?

RB: That's a great question.  There's no doubt that horror is in almost every household in some way.  It could be easy to look at the influence of "The Walking Dead" or Paranormal Activity.  But, it seems that all parts (television, movies, events, etc) have worked in harmony.

HH: Great to see you on board with Screamfest, Dominic.  Would you consider yourself a horror fan?

Dominic Monaghan: I am a fan of a good story.  If a film can have a good story AND be frightening, fantastic! So many horror films just try to shock or be gross.  I need something compelling.  What's interesting is when a complex and rich story can include gut-wrenching terror.

HH: What are some of your favorite horror films?

DM: My favorite horror film is Let the Right One In. So touching and soulful. But, again, those that tell a good story, I love ... The Exorcist, Halloween, It Follows, etc.

HH: What, in your words, is the importance of Screamfest?

DM: If you are wanting to see the future of not just horror, but indie filmmaking, Screamfest is the place to be.  All aspects of the process are represented ... writing, cinematography, acting, directing, producing, funding ... it's all here as a single community.

If you're on the West Coast or are interested in attending Screamfest, running October 10-19th, below is a look at their 2017 line up. Check out their Web site at http://www.screamfestla.com

LEATHERFACE (USA) 2017
Directed by Julien Maury, Alexandre Bustillo
Written by Seth M. Sherwood
Produced by Carl Mazzocone, Christa Campbell, Lati Grobman, Les Weldon
Cast: Stephen Dorff, Lili Taylor, Sam Strike, Sam Coleman, Vanessa Grasse
North American Premiere
In Texas, years before the events of the Texas Chainsaw Massacre, in the early days of the infamous Sawyer family, the youngest child is sentenced to a mental hospital after a suspicious incident leaves the sheriff’s daughter dead. Ten years later, the Sawyer teen kidnaps a young nurse and escapes with three other inmates. Pursued by authorities including the deranged sheriff out to avenge his daughter’s death, Sawyer goes on a violent road trip from hell, molding him into the monster now known as Leatherface.

TIGERS ARE NOT AFRAID (MEXICO) 2017
Directed by Issa López
Written by Issa López
Produced by Marco Polo Constandse
Cast: Paola Lara, Hanssel Casillas, Rodrigo Cortes, Ianis Guerrero, Juan Ramón López
LA Premiere
We are in a Mexican City turned into a ghost town by the drug-war. Estrella is 11, and when her mother vanishes, she makes a wish: she wants her mother to come back. And mom does return—from the dead. Terrified, Estrella escapes and joins a rag-tag gang of other children orphaned by the violence, all escaping their own past. But she learns that in a city ruled by death, you can’t simply leave the ghosts behind; they walk with you wherever you go.

TRAGEDY GIRLS (USA) 2017
Directed by Tyler MacIntyre
Written by Chris Lee Hill, Tyler MacIntyre
Produced by Armen Aghaeian, Tara Ansley, Anthony Holt, Edward Mokhtarian, Craig Robinson, Cameron Van Hoy
Cast: Brianna Hildebrand, Alexandra Shipp, Kevin Durand, Jack Quaid, Craig Robinson
LA Premiere
Best friends Sadie and McKayla are on a mission to boost their social media fandom as amateur crime reporters hot on the trail of a deranged local serial killer. After they manage to capture the killer and secretly hold him hostage, they realize the best way to up get scoops on future victims would be to, you know, murder people themselves. As the @TragedyGirls become an overnight sensation and panic grips their small town, can their friendship survive the strain of national stardom? Will they get caught? Will their accounts get verified?

TRENCH 11 (CANADA) 2017
Directed by Leo Scherman
Written by Matthew Booi, Leo Scherman
Produced by Tyler Levine
Cast: Rossif Sutherland, Robert Stadlober, Charlie Carrick, Shaun Benson, Karine Vanasse
U.S. Premiere
In the final days of WWI a shell-shocked tunneller must lead an Allied team into a hidden German base...100 hundred feet below the trenches. The Germans have lost control of a highly contagious biological weapon that turns its victims into deranged killers. The Allies find themselves trapped underground with hordes of the infected, a rapidly spreading disease and a team of German Stormtroopers dispatched to clean up the mess. The only thing more terrifying than the Western Front... is what lies beneath it.