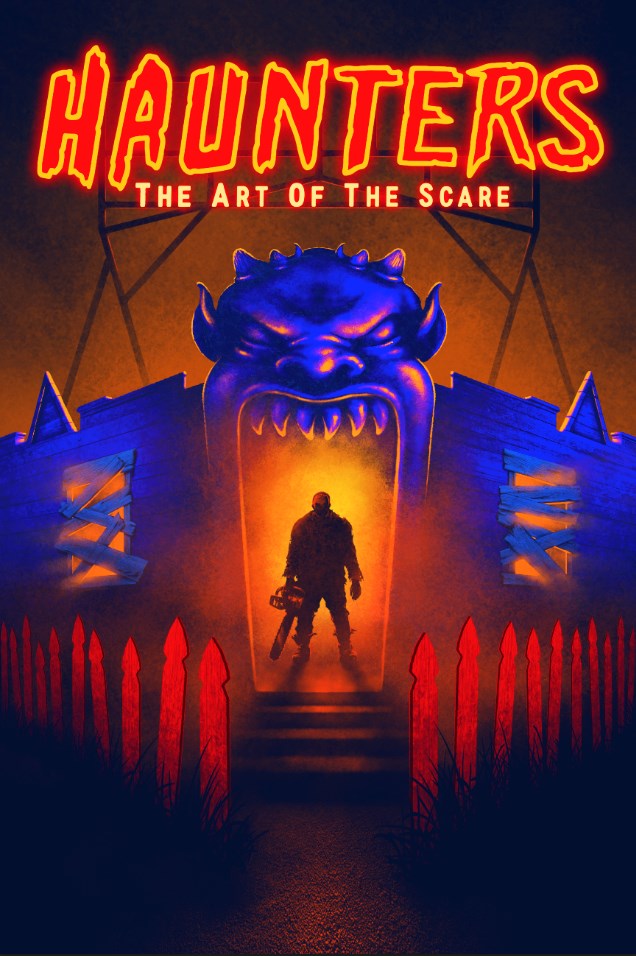 Having spent a few years in the haunt industry, I was glad to see this documentary. It doesn’t focus on special effects, the psychology of fear, location, marketing, etc. It doesn’t try to sell anyone on going to any particular haunt. Haunters: the Movie is specifically a glimpse inside the minds of those who love nothing more than to scare people. Jon Schnitzer (director) spent years traveling the country and visiting haunts of all sizes, from small home-haunts to the “big guys” – i.e. Knott’s Scary Farm and Universal Studios Haunted Halloween Nights. He talked to owners, builders, haunt actors, neighbors, and even haters.

Why is scarring fun? What drives people to spend a lot of money, give up a lot of time, and cause problems in their marriage? Haunters is the first, deeply penetrating exploration into the “whys” and “hows” of haunted attractions. The entire cross-section of haunts is represented; from the local retired couple who love entertaining neighbor kids every Halloween to immersive experience haunts, such as the infamous McKamey Manor, where the physical and mental interactions borderline on real torture. Mostly, Haunters is about people who haunt and what haunted attractions have meant to their lives. Some of it is funny. Some if it is truly frightening. Some of it is whimsical. Some of it is heartbreaking. At times, it seems that Haunters is a bit all over the place. You feel like you’re being led, haphazardly, from haunt to haunt and from scene to scene. But, as you watch, you begin to feel the flow. It isn’t until the end that you realize that Schnitzer is truly an adept storyteller. Haunters is presented to its audience much like a good haunt is presented to its guests – confusion that resolves into harmony.