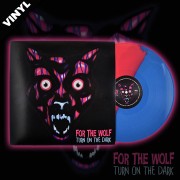 For The Wolf teams up with HorrorHound Records to release their sophomore album recording Turn On The Dark. The 14-track LP boasts grungy pop-punk rock songs such as "A Faery's Song," "Creativity Riot," "Heaven In A Ghost Town," and the fast-paced rock anthem "Save This City!" The band is a mix between classic 1990s grunge and alt rock met with modern acts like Paramore ... with a dash of horror thrown in for good measure! Vinyl features a killer limited edition pink/blue split presentation!

NOTICE: All LP orders contain a code inside the album for a free copy of the digital album